The beauty of Brynne ... 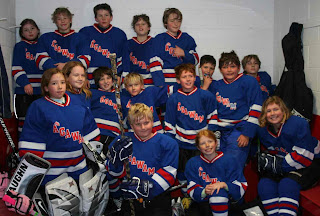 Brynne and I made the short drive down Route 1 to HockeyTown again yesterday for another one of her power-skating sessions. I know this sounds like bragging, but I'm always amazed at this kid's upbeat attitude - always eager to suit up, always smiling (she's on the far right in the accompanying photo, with her Agawam Squirt squad from this past season). It was about a year ago that Brynne came up to me - probably during my post-Stanley Cup playoff funk - and said: "Daddy, I think I want to play hockey next year." Other than my wife telling me she loves me, I don't think a single sentence could have made me happier. I have two wonderful daughters, 12 and 10. They're both healthy, active, and fun to be around. But I had all but reconciled myself to the fact that neither would play hockey. Maddi, my eldest, is a solid swimmer, and loves lacrosse and dance. Brynne also swims and plays lacrosse, in addition to soccer. However, her real passion is horseback riding (which, by the way, makes hockey look like a pauper's pastime). Both girls had figure skates, and enjoyed our weekend family outings to a local prep school rink. Hockey, sadly, didn't seem to be in the cards. All that changed the instant Brynne, then 9, announced her intentions to give it a go.

I tried to suppress my joy. I didn't want to go hog wild or anything, knowing that for a 9-year-old, today's commitment can be tomorrow's memory. But Brynne is different .... she rarely starts any project without at least giving it some serious thought. I told her hockey was a commitment, and would require a lot of work. She said she was OK with that (after all, this is the same kid who told me, when she was six, that she would happily muck out horse stalls in exchange for riding lessons). So I calmly but immediately emailed about a hundred hockey friends to see if I could rustle up a full set of gear without plunking down serious coin for new equipment. The gang came through big time, and before I knew it Brynne was signed up for a "Learn to Play Hockey" program. The transition from casual figure skating to hockey hasn't always been an easy one for Brynne, but you'd never know it to watch her laughing and jostling with her teammates. I signed on to coach her Agawam team, and Jere Moroney, my assistant, said Brynne was the team leader in having fun. At one point, near the end of a ridiculously long youth hockey season (Labor Day to mid-April), Jere looked at me during practice and exclaimed: "Does that kid ever stop smiling?" Jere should know; his daughter Gracie was a close second in grins-per-minute. Brynne exudes such an unbridled joy when she's on the ice, and I'm not sure where that comes from. I loved playing the game (and still do) but remember being so much more earnest, more workmanlike. Brynne, by contrast, seems to be relishing every moment.

Still, hockey was and is challenging for Brynne, as she's a relative newcomer compared to many of her Agawam pals. She had a solid first season, and never once failed to answer the bell, despite early morning wake-up calls and late-night practices when she understandably would have preferred staying home. At the end of the season, when I was asked to do team evaluations, Brynne asked me what I thought of her performance. I was brutally honest with her, as I always try to be. Her positional sense and enthusiasm are big attributes. Her skating and stick skills need considerable work. Despite my reservations about going overboard, I suggested a post-season power-skating clinic, and Brynne, eager to play on a Squirt 2 team next year, accepted the offer. So now, even on a beautiful spring afternoon, she's lugging her gear out of the basement and into the car. She dreams of horses on the way to the rink, but once she gets there, she laces her skates up without any help and hits the ice with conviction. With the rare exception, she works hard (Paul Powers, the coach and an old hockey buddy of mine, doesn't cut her much slack, thankfully). Each session, I swear, she's getting a little bit better. And her dazzling perma-smile simply lights up the rink. How lucky am I?