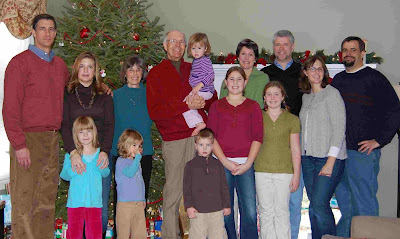 I've lost count of the number of times my youngest, Brynne, has asked: "Dad, what do you want for Christmas?" The answer never changes. "I just want to spend the day with my family, and know that everyone is healthy and happy." Apparently, that's not enough of an answer for a soon-to-be 11-year-old whose Wish List for Santa is twice as long as my typical blog entry. But it's a truthful answer, uncharacteristically (for me) short and sweet. If I can wake up Christmas morning in a warm home, my wife by my side, knowing that Brynne and Maddi are eagerly awaiting our arrival in the family room, then I'm a supremely happy man. Not carefree, but certainly happy and content.

Obviously, some of the "big" things I could ask for, like consistent employment and maybe that new addition on our cozy cottage here in Hamilton, are out of the realm of Christmas wishes. This has been a difficult year for many, and we didn't dodge the economic bullet either. Both Lauri and I seem to be working harder for less, but we're working, and we still love what we do (most of the time, anyway). And we still love being with each each other, and with our girls (I should probably include the knucklehound, True, and the two new kittens, Izzy and Molly, into that mix). In that regard, we're truly wealthy.

Tonight we ran off to Bolton, Massachusetts, for Christmas Eve with the in-laws. Maddi and Brynne's Grandmom and Granddad Zinn flew in from Kansas the night before, so there was no reason not to get a head start on the weekend's festivities at my brother in-law Rob's house, along with his beautiful wife Kate and two precocious youngsters, my nieces Emma and Olivia. Tomorrow, we'll be New Hampshire bound, to my sister in-law Jenni's place in Pelham, with almost the entire Zinn clan in tow (the accompanying photo above is from last year's Christmas Day at the Woodheads' home, with all the Zinn grandchildren!). Then, on Sunday, it's back to New Hampshire (Concord this time), to spend an afternoon with my siblings MaryEllen, Chris and Sean, their spouses, and all the nieces and nephews (in a neat twist, Maddi and Brynne are the youngest kids on my side of the family, but the oldest on Lauri's side). With luck, the girls' Grampy and my Uncle Art will join us as well, No doubt the Colorado boys, Matt and Mike, will phone in to say "Merry, merry!" along with their brides, Laura and Brenda, and maybe Uncle Bill and the Pare clan will check in from Maryland. Sure hope so, anyway.

These gatherings are a special events, traditions we carry on in the spirit of our parents and grandparents, a reminder of the things that are truly important. The atmosphere of camaraderie is unrivaled, the sense of belonging unquestioned. The laughter and the heartfelt conversation flow freely. I pray that Mom and Dad are able to look down from their perch high above us, and enjoy the sights of their children, and grandchildren, sharing these family-affirming moments. It's all but impossible to stop my mind from reeling back through the years, to the snow-covered mornings in New Jersey and New Hampshire, or wherever our holiday travels took us. There are instances when the nostalgia is almost overwhelming.

Still, Christmas, even more than New Year's, is also a time for me to reflect. I know how lucky I am to be part of not one, but two large caring and loving families. I think of the multitude of friends that Lauri and I are so fortunate to have, including those long-lost pals we've reconnected with via FaceBook (during our somewhat haphazard sojourn into social media). We live in a terrific neighborhood, with thoughtful neighbors. No, last year wasn't always a walk in the park, but that's why it helps to have a memory as selective as mine. I can't look back on 2009 without smiling, without feeling blessed. And that, I truly believe, is no accident.

I hope and pray that the holidays hold the same small-but-significant miracles for each and every one of you. Joyeux Noel, and a very Happy New Year!

Warm regards,
-Brynne, MaryAlyssa, Lauri & Brion
Posted by BrionO'C at 8:12 AM No comments:

Boston, with Christmas around the corner!

Despite having played sports most of my life, those sublime moments when it all came together, when my mind and body fused seamlessly, when I was "in the zone," were rare. I guess that makes it easier to remember them -- hockey games when the puck looked more like a beach ball, soccer games when every touch of the ball was spot on, epic mountain bike rides, endless powder days atop my snowboard, nailing my first shortboard gybe -- but I still wish they happened more often. It's what we strive for as athletes ... not only to compete, but to attain a certain surreal sense of accomplishment and skill. Those moments happen even less often in coaching. But they do happen.

Monday night I was in a cranky mood. I had deadlines up the wazoo, and the words weren't exactly flying off my fingertips. My daughter Brynne's Squirt hockey team was schedule to play on a school night, which never sits well with me (another testament that, while the Valley League likes to "say" that it's all about the kids, its "actions" indicate that it's all about the money). A 6 p.m. start time meant driving 40 minutes into the teeth of rush hour traffic, and there was a good chance we wouldn't have enough bodies. Sure enough, one by one, I started getting email messages saying this player and that player couldn't make it. Then our goalie's mom called, and that's never a good thing. So, I emailed another parent to recruit his son to tend the nets, and made arrangements to pick up the goalie gear. All the while, my disposition was getting more and more sullen. Making matters worse, we were playing a team from Arlington, and the kids from Spy Pond always come to play.

Brynne and I were among the first to the rink, along with two other players and their parents. Other players started filtering in, everyone except Ned, our goalie for the night. His mom called, saying they were stuck in traffic. I started growling. I went to Brynne, who made it clear she wasn't thrilled about the prospects of playing goal. I told her it was one of those times when it stinks to be the coach's kid. "Sure does, " she said. I conferred with Jere, my co-coach, and we decided to simply start the game without a goalie, putting a regular player in goal until Ned could get ready. And this is when my night started to turn around. We only had nine position players, which meant we had two full lines at forward and three defensemen, who would have to rotate (playing two shifts on, one off). I asked one of them, Nick, to start in goal, and he didn't hesitate. "Sure thing, Coach," he said, with an eagerness that caught my attention and made me smile.

So I launched into my pre-game chat, telling the kids to skate as hard as they could when they had a chance to get the puck, but to also try to conserve their energy for a full game. I told my three defensemen -- Nick, Gracie and Callen -- that that I'd be expecting a lot of them. Same for our two centers, Tookie and Mayo, since I needed them to backcheck relentlessly. And I asked my wings -- Timmy, Jack, Christian and Brynne, to take the pressure off Ned and the D by forechecking like banshees. I told them that Arlington kids always skated with a purpose, and we would really have to rely on one another to stay in the game.

Things didn't look encouraging when we got on the ice. The Arlington squad seemed to have twice as many kids, and I muttered to myself "That team has its priorities straight." Still, Ned made it out of the locker room just as the game got under way, and I figured Jere and I would just play it by ear. That's when something magical happened. Our kids got after it from the first drop of the puck, and never once stopped as long as they were on the ice. They would come to the bench flush, chests heaving. They'd sit, gulp down some water, and then get ready for their next shift. And when they hit the ice, they were moving. I was stunned. Mayo, our best stickhandler, put us up 1-0, and then Brynne doubled the margin when her centering pass ricocheted off a defenseman and into the net. "That was embarrassing," she said afterward. "They all count, honey," I replied.

Meanwhile, my defensive trio were playing like demons, rarely letting Arlington anywhere near our goal. Our kids battle for every 50/50 puck, and won most of them. Ned kicked out any shots that came his way, though his technique was a bit more unorthodox than I'd like. During one excruciating moment, the puck sat between his skates as he spun around, looking for it. Sure enough, though, our defenders cleared it away. Between periods, I told our kids not to change anything. I wanted them to keep skating, but to stay within themselves. But they continued to exceed every expectation. In the second period, Arlington got one past Ned, but Timmy buried a pair to give us a 4-1 lead. I kept waiting for the roof to cave in during the third period, but it never happened. Each time I asked a player if he or she were ready to go, the answer was an emphatic "Yes, Coach." Nick was literally jumping over the boards. Tookie jammed in our fifth goal, and we left the ice with a hard-earned 5-1 win. The Arlington coach was incredibly gracious: "How do you get your kids to get after the puck like that," he asked, clearly impressed with the effort our kids gave. I shrugged. I can't repeat exactly what Jere told me after the final whistle, but the family version was: "That was awesome!"

In the locker room, the kids were exhausted but happy. I told them they deserved to be both. I could not have been more proud of them, and I told them that too. As hockey players, they couldn't have asked for a better Christmas present. And it was a present they got to share with their teammates, making it all the more sweeter. It all came together for them, and I wanted them to remember that it was hard work and teamwork and will power that made it happen. I hope it happens again.