Boston, with winter on the way!

As a youth hockey coach, I get to see, up close and personal, the entire spectrum of human behavior, from kids to parents to grandparents. Much of it, frankly, isn't very pretty. And I suppose some think of me and my Old School ways in the same vein. I take the "iron hand, warm heart" approach to coaching. I don't cut the kids much slack. I want them to enjoy sports, but also want them to respect the game. They need to know that games aren't created for their entertainment; the games exist to challenge them, to help them learn and grow. The enjoyment comes from mastering a skill, from learning that extra effort is always repaid in full, and from sharing a unique camaraderie with teammates.

Still, I oftentimes think most parents don't get this approach. My bride once coined the phrase "soccer day care," and I think that probably applies to youth hockey as well. At least town-sponsored programs. Don't get me wrong; I'm not a fan of the over-the-top, win-at-all-costs approach either. But sports, really, are about challenging yourself, getting knocked on your butt and getting back up, and repeating the process until you succeed. It's not about being pampered, or about the nice gear your well-heeled folks can buy for you. In sports, it's about what YOU can do on the ice. No excuses (despite the fact that we live in an area where parents will make every excuse, no matter how preposterous, for their child!).

But every now and then a moment happens to remind me why I do this. It might be an exhausted smile, a rare "thank you," a spark of recognition that what you're preaching is getting through. Last weekend our Squirt 2 team had a game (at the ungodly hour of 6 a.m., at a rink an hour away) against a squad from Haverhill. Unfortunately for Haverhill, their goalie didn't show, which meant some poor kid without the proper equipment had to stand between the pipes. By late in the second period, with our squad winning 5-0, my assistant coach and I implemented a "three-pass minimum" in the offensive zone (like I said, the other team didn't have a goaltender, and we had no intention of running up the score). We re-emphasized that rule between periods. It was, we said, not only the right thing to do from a sportsmanship perspective, but our players needed work on their passing.
In the third period, one of my defensemen, a burly, likable kid (we'll call him "Bobby," in the interests of anonymity), intercepted a clearing attempt and took a shot from the point without the requisite three passes. My assistant and I immediately agreed to take him off the ice. This is where it gets interesting. I asked Bobby if he understood why I pulled him, and he sheepishly admitted he knew he should have passed. I emphasized that there are times when you have to resist doing what you want to do, and instead do what's right (in this case, pass, so we could be good sportsmen). The boy nodded. A moment later, he mumbled something behind me. When I asked him to repeat it, he said: "I'm sorry, Coach." It was incredibly sincere.

The next time I looked at him, he had tears running down his cheeks. I was really moved ... this young man really cares about the game, and really cares about doing the right thing. I was proud of him. "It's OK, Bobby," I told him. "We're good, right?" He quietly said "yes," and I knew we were. 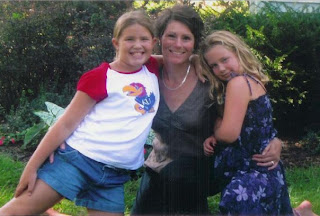 Today is my bride's birthday. She gets one day to celebrate every year. I get 365, because I was lucky enough to have her say "Yes" when I proposed 16 years ago (on my birthday, no less ... how's that for the present of a lifetime?!). Lauri Zinn O'Connor is a rare and special woman, not only because she puts up with this crusty old Irishman, but because she does so with such grace and quiet understanding. Living with a self-employed freelance writer (or at least this self-employed writer) is no walk in the park, but Lauri somehow makes every day special. That is her gift, and that's why I'm one of the most fortunate men on this planet.

Lauri typically handles all my idiosyncrasies -- and I admit I have more than my fair share -- with her natural good humor and a finely honed sense of convenient amnesia. We have our flare-ups (what couple doesn't?), but even at the worst moments, there is no one I'd rather be with. Her laugh is absolute music to my ears, with a voice to match (my brother Sean once said, in a complimentary nod to Lauri: "Marry someone with a voice you like, because you'll be hearing a lot of it."). She even indulges me in my Mitty-esque flights of fancy regarding my athletic pursuits, whether its cycling, hockey, soccer, skiing, or something else. In fact, if I'm sitting around moping, due to this injury or that, she's the one who will shake me out of my doldrums and get me back on the flow train.

Lauri's also an incredible mom to our two precocious daughters (who, fortunately, get their good looks from the Zinn side of the family!), and the indisputable head of our little household. She keeps our Hamilton cottage neat as a pin (at least by my standards; I'm sure she'll disagree), inside and out. But, as my Mom liked to say, there's a world of difference between a house and a home. Lauri makes our house a home. She's the glue that keeps us together, and I want her to know how much I appreciate and adore her. That goes double for the girls, I'm certain.

Yes, I may have my shortcomings, but at least I have the good sense to know I've got it good. Check that. I've got one of the best! Thanks, beautiful!