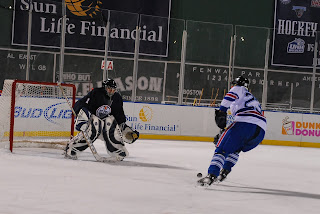 The first thing I notice about Boston's Fenway Park, driving into the city at night in January, is the enormous banks of lights that loom over the century-old stadium. In winter, with the city covered by a dirt-splattered comforter of snow that is not quite white, the ballpark lights seem totally incongruous with their surroundings. Yet here I am, standing outside the park, my 50-something heart racing with the excitement of a grade-school student.

I had all but resigned myself to having to pass up the opportunity to skate at Fenway Park, thanks to a lingering groin injury that simply refused to heal. The invitation came by way of Joe Bertagna, a good friend and the Hockey East commissioner who I've known for almost 10 years now. When the NHL selected Boston to host the Winter Classic on New Year's Day, Bertagna, along with BU coach Jack Parker and BC coach Jerry York, quickly jumped on board, organizing a college hockey double-header the following Friday.

During the week in between, the ice at Fenway was rented out, and a number of high-rollers didn't blink at the $10,000-an-hour asking price. That meant roughly $250 per player, and though I had a few inquiries, the price was a bit too rich for me. Then came the invite from Bertagna, who got an hour compliments of the Red Sox brass.

Tempting as it was, I almost didn't go. I've been struggling with a persistent groin pull for the better part of four months, and I simply wasn't ready to get back on the ice. I'd been patient, and really didn't want to screw up what was left of the winter season by playing prematurely. I thought that made perfect sense, especially since it put the game before the venue. So I told Joe "Thanks, but no thanks."

Still, the more I talked to friends, the more I began to have doubts about my reasoning. Essentially, most responded by saying, in short: "You're nuts if you don't go!" Eventually, I came to the same conclusion. There were going to be four goalies, so even if I reaggravated the injury, I could gracefully bow out, and just enjoy the game from a front-row seat on the bench. More importantly, I realized that, no matter how bad my injury, it would heal before they brought ice back to Fenway. It was truly shaping up to be a "once in a lifetime" opportunity.

So I quickly backtracked, fired Joe an email, asking back in. Fortunately, he hadn't filled my spot, and I was back on the roster. That afternoon was a mix of excitement and trepidation. I hadn't put the pads on in a month, so I was concerned not only about the injury, but being woefully out of game shape and playing poorly. I've always jitters before playing, but this was especially acute. I drove down with a friend and fellow goalie, Andrew Huntoon, and he was keen to discuss our game plan. Game plan? I just wanted to take it all in, and get though the skate relatively unscathed.

As we pulled off Storrow Drive, I could see the banks of lights perched high above the park’s façade, and my pulse started racing. We entered Fenway underneath the stands, the bowels of the ballpark adorned with concrete and red brick. Nothing fancy there. That all changed the moment I walked up a short runway, though a large, hanging tarp, and out into stands.

The setting was, in all honesty, a bit surreal. It looked more like a giant Hollywood movie set than the grand old ballpark that I cherished. I had been on the field twice before, the first time in 1999 to take 15 swings as part of a fund-raiser for the Jimmy Fund and a story for Continental Airlines (see here). The second time, I stopped in to chat with a few Red Sox stars, including Jason Varitek and David "Big Papi" Ortiz for a story on The Players Trust. Both those visits came during the daytime, mid-summer, during baseball season.

This time, it was the dead of winter, barely 25 degrees outside, and at night.

There was the rink, seemingly suspended in the middle of the field, a large patch of white ice where I've only seen beautifully maintained green lawn and a manicured dirt infield. The left field wall – the famed Green Monster – was festooned with enormous banners announcing the upcoming Frozen Fenway college doubleheader. Other players started filtering in, including a number from the Over-50 Tuesday night league that Joe and I play in. The mood was light and fun, just like every Tuesday night at HockeyTown in Saugus. There were no locker rooms, so after putting on my undergarments and pads, I grabbed the rest of my gear and hobbled down the aisles on the third-base side and parked myself in a folding chair beside the rink. I kept peeking at my surrounding, shaking my head, laughing to myself; "How lucky am I?"

But once the game got under way, it was, just as Jack Parker predicted, "a hockey game." And, as much as I love Fenway, my affections for the park pale in comparison to the game. While I was happy to steal the occasional glimpse at the looming stands beyond the rink, pinching myself the entire time, I made it a priority to focus on the action in front of me. My breathing was labored and my movements stiff. Clearly, once past the half-century mark, the body doesn't respond well to a month of inactivity. So I tried to get by on my wits and experience. It quickly became obvious that this would be a Fenway version of the NHL All-Star game, where defense is nothing but an afterthought.

Our squad took an early lead, but soon the Bad Guys were buzzing my net. They tied the game when an old friend, Scott Donnelly, zipped a cross-crease pass to an unmarked forward, who calmly potted the puck behind me. Even though I anticipated the pass, I couldn't get anywhere close to the puck. So much for being game ready.

But the groin held together, so I couldn't complain. I dug the puck out of the net, and got on with the game. I managed one ridiculously lucky save, reaching back with my glove hand to steal a shot bound for a wide open net (left vacant because I had fallen, and couldn't get back up). And I even managed to stuff young Mr. Donnelly on a breakaway (captured in the photo above). However, Scott got the better of me during several scrums in front, slipping in a couple of garbage goals. He was quick to remind me, with a broad smile, that in hockey, the goals don't have to be pretty, they just have to cross the line.

When the hour came to a close, I'm pretty sure we had "lost," but no one seemed to care. Everyone lined up, shook hands, slapped a few backs, shared a few more laughs, and made plans to meet at the Game On pub around the corner (where our Peter Pan celebration would last another 90 minutes or so). No one was in a rush to leave the field, least of all me.

As most of the players slipped on their skate guards and clomped back underneath the stands, I slowly peeled off my pads and skates. Just as I was about to zip up my bag, the lights suddenly went dark, and I chuckled to myself: "Party's over." Except for a couple of Fenway security guards, I was the last one off the field. A bright winter moon cast a ghostly glow over the field. I tossed my bag over my shoulder, and shuffled toward the exit.

At the padded infield wall, I stopped to take one last look around. I want to sear the moonlit panorama into my mind's eye. It was, just as friends had predicted, a memory to last a lifetime. I'm grateful.