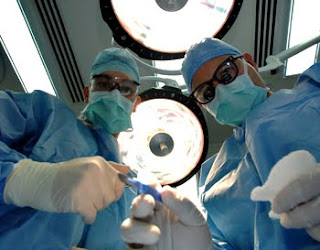 For years, I've joked with my stepfather about taking up golf "when I have my hips replaced." It was a running gag that we both got a good laugh from, because Don knows I'm incapable of ever taking golf seriously, and because I never thought I'd need to get my hips replaced. Well, it appears Don's take was a whole lot more accurate. Because the bill has come due.

My hips, to be kind, are a wreck. They show the wear and tear of 50 years of a wonderfully rough-and-tumble life. These hips could be the first piece of evidence in the trademark trial of "Boomeritis," the tongue-in-cheek term coined by the American Society of Orthopaedic Surgeons to describe a raft of injuries that post-40 athletes subject themselves to.

I think if I added up all the days I've spent on this planet, and divided that number in half, I'd have a pretty good count of all the football, soccer, basketball, street hockey, ice hockey, baseball, and softball games I've played. And that wouldn't include the countless days running, pedaling (on and off road), downhill skiing, cross-county skiing, snowboarding, hiking, climbing, swimming, and even the occasional weight-lifting session (never was a big fan!). There's an accumulative effect of all that fun, and for me, it's pretty much concentrated in my lower back, and my hips.

Still, in all honesty, I can't complain. When my brother Sean, an orthopedic surgeon in New Hampshire, took a look at my hip X-rays, he confirmed what two surgeons told me previously. I was lucky to get 50 years out of those ol' hip bones. Seems I have a natural deformity in the "ball" joint -- too much bone -- which didn't make for a great fit with my genetically shallow socket joints. "Essentially, you've been trying to fit a square peg into a round hole all these years," said a straight-talking Dr. Richard Wilk. "You were bound to have problems. I'm a little surprised this didn't happen earlier."

Which, of course, is small consolation when you're hoping to get another four, five, 10 years out of the current model. Surgery became necessary this summer, when a suspected "groin pull" from 11 months earlier failed to heal, and doctors finally ruled out a "sports hernia." An MRI in August revealed the extend of damage to my hips, especially my right, including joint deterioration and a torn labrum. That's when surgery entered the equation, and I immediately set out to find someone good. "This is the new sexy surgery," warned Sean. "There are a lot of guys rushing into this field. You want to find someone who has done a lot of them."

Fortunately for me, I found Dr. Wilk, who came recommended not only by Sean, but by several Division 1 goaltenders who I help coach. Plus, Wilk has been doing these hip arthroscopes for years. I liked his resume, if not his diagnosis.

"Basically, your hips are pretty much beat to shit," Wilk told me during my last pre-op visit. "Is that a medical term?" quipped my bride, who accompanied me for emotional support, and to get a better idea of how heavy an anchor I'd be post-surgery. But I was comfortable with Wilk's no-nonsense approach. He was telling me that he would do what he could once he got inside the hip, but he wasn't making any promises. In short, he could rely on his own skills as a surgeon, but couldn't be nearly as certain about the raw material he'd have to work with. Fifty year hips rarely produce a gem.

So I've got a surgery date, and I'm eager to get it done. Like most everything I've done in life, I'd rather take a course of action. Surgery is never a great option (like BU coach Jack Parker once told me, "The only minor surgery is the one someone else is having."). But the alternative -- doing nothing -- is much worse. Time to pay the bill, and get on with it. Golf can wait.