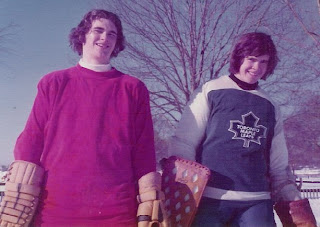 Late last week, I was doing some homework for a really fun story on pond hockey for ESPN, as told by some of the giants of the college game, namely Jerry York of Boston College and Jack Parker of Boston University (for that story, click here). These are men who have reached the heights of their professions, having coached three national champions each, including each of the last two years. But when the subject turns to pond hockey -- the hockey of their youth -- these men sounded a lot more like young boys. Even though our interviews were conducted by phone, I could sense a wistful, faraway tone in their voices as they talked longingly about long days spent on the frozen ponds that dotted the Greater Boston area. And I understood completely.

The accompanying photo is from1973, meaning I was all of 15 at the time. That's me on the right, resplendent in my vintage 1970s-style Toronto Maple Leafs jersey and goalie gear, rubbing elbows with my older brother, Sean. Obviously, stepping back 36 years in the Way Back Machine will shade your memories, but fortunately for me, all the recollections are good. Growing up in New Jersey, necessity dictated that if we were going to play hockey often, we'd be playing mostly on the streets. But in wintertime, I'd be salivating over the prospects of getting on the ice. I honestly don't have a treasure trove of memories from this time -- my gift for recall about as sketchy as thin ice -- but the ones I have stand out like beacons. I remember peering out our kitchen window at 555 Nordhoff Drive at night, eying the thermometer outside, praying the mercury would dip below the magical 32 degrees Fahrenheit. It didn't matter if it was borderline, or that Mom correctly told me that the ice would be marginal at best; I hoped for some miracle of physics, which would allow water to freeze as long as the temperature "was in the ball park."

I remember Dad's old drab, olive green duffel. The heavy Army-surplus canvas bag wasn't fancy, but I could stuff all my goalie gear into it, the same gear I bought with my own paper route money. I remember trying to negotiate with the knuckleheads at the Town of Leonia recreation department to allow at least some portion of the flooded basketball courts at Overpeck Park to be used for hockey (even in the 1970s, civil litigation was a thriving business in the New York Metropolitan Belt, and town officials were scared silly, convinced that hockey was a euphemism for "potential lawsuit"). So we had to pretty much get to the courts first thing in the morning, before any figure skaters got out of bed. Those crack-of-dawn treks to the park, with all our gear slung over our young-but-sturdy shoulders, were invigorating. The day this photo was snapped was just about ideal -- mail-order blue skies, with crisp, cold temperatures making for rock solid, smooth ice.

There were a couple of ponds scattered around town too, and I recall playing shinny hockey occasionally, without all the fancy gear and jerseys we were sporting above. One spot, Crystal Lake, down off Grand Avenue, even had a big bonfire. Nothing felt, or smelled, better than inching up to the flames, letting that natural furnace drive the cold from our bones. But the best, the absolute pinnacle of pond hockey perfection, was going to Dorr's Pond in Manchester, NH. This was one of the great rewards for the long drive north to visit Grandmere and Grandpere. The pond, beside Livingston Park, was a short walk from our grandparents' house on Pickering Street. In the '70s, before "global warming" became an ingrained part of our lexicon, my siblings and I would bundle up, grab our skates and sticks and a few coins for a hot chocolate, and shuffle down to the pond.

There, the city had a warming hut dividing the pond and an actual rink (with boards and lights!). The rink was the domain of the older kids, and young men, but we were able to sneak on every now and then, typically playing a smaller, cross-ice game. I don't think anything made Grandpere (a native of Quebec) happier than seeing his small army of grandchildren mucking around on the ice. In later years, after our clan moved to New Hampshire, my brothers and I (and friends) would still frequent Door's Pond, or other frozen bodies. One day in particular stands out, when my brother Chris and I and two friends, Tom Duval and Matt Sopel, found some black ice up by Lake Massabesic that I swear was smoother than glass. God help us if we missed a pass, because the puck would slide for just about forever! Naturally, we'd argue about who was responsible -- the passer or the passee -- for skating after it! And, I'm sure, we had little appreciation for just how magical, and how fleeting, these days were.

Today, pond hockey stills calls to me, though not as often, due to the scarcity of good ice. And I'm a bit more leery of its siren's song. Those pressure cracks in the ice were once just a minor inconvenience because they interrupted the smooth path of the puck, making it jump unpredictably. Now, those cracks look like a bad injury waiting to happen. I can just envision my blades getting caught, and one of my knees coming apart like a cheap suit. So I err on the side of caution, slipping on some elbow and knee pads, "just in case." Because when my girls say they want to skate, I can't say "No."