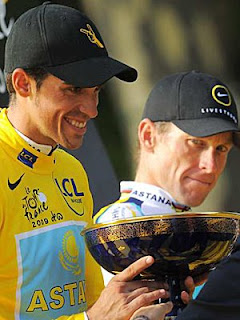 Just wondering if I was the only one who found the Tour de France's final dash into Paris a bit disappointing. Not the race itself, mind you. I always love a good sprint, and Team Columbia's ability to bring Brit Mark Cavendish to the line is simply awe-inspiring. The man, and his support squad, always seem to get it right. And it was great to see Big George Hincapie leading the Columbia train right up to the final bend.

But the Tour's denouement (it is, traditionally, a formality) brought to a close one of the least dramatic Tour's of recent memory. Though the Versus team of Phil Liggett, Paul Sherwin, Bob Roll and some pretty boy (Something Hummer) tried their best to create suspense, there really wasn't much. I don't know if that was the fault of the race organizers, who may have erred in their calculation that the climb up Ventoux in the penultimate stage might break the race open, or the racers themselves. Clearly, the biggest story line was the Astana cat fight between Alberto Contador and Lance Amstrong (that Texas-size ego of our favorite alpha dog had some obvious problems with being the second-best rider on his own squad). But team infighting, as intriguing as it might be for some, didn't translate to drama on the race course.

Instead, spectators were treated to a pedestrian race that had only three (maybe four) legimate challengers to the crown, and those characters were relegated to marking one another up the Alps, limiting any time gains. It was, in a word, boring. God, what I wouldn't have given to see an Eddie Merkxx or Bernard Hinault-style attack in those last few stages! Contador did pull out a superb final time trial, and was clearly the strongest rider in the race. So, in that sense, it was nice to see "the best man" win. But, really, was it the "epic" race that Versus was constantly advertising? Hardly. Not by a long shot ...

So here's hoping that Contador and Armstrong, destined for opposing teams, plus Andy Schleck and a renewed Cadel Evans (and maybe even Levi Leipheimer, Carlos Sastre, and - dare I say it? - Floyd Landis) will add a fair amount of sizzle to next year's Tour. It desperately needs it.