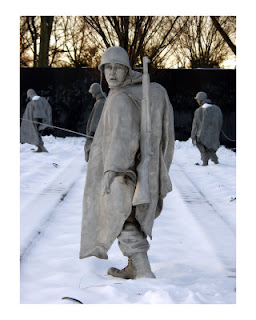 I find it somehow fitting that the skies are shrouded with sad, gray clouds this morning, given the disrespectful behavior of two local institutions regarding Veterans Day. An exclusive local private school (Shore Country Day) and my daughter's hockey league (the Valley League) both have decided that Veteran's Day is not a holiday worth recognizing. I'm sure they're not the only two; just ask any veteran who is being told he or she has to work on Wednesday. But this is not a holiday that should ever be taken lightly, or considered "optional."

I never served in the armed forces, fortunate to have slipped into that comfortable little crease between the end of the Vietnam War and the ensuing rise of the Gulf War battles (which, incredibly, we're still embroiled in to this day). And, I can honestly say that, had I been drafted during the Vietnam War, I'm not sure I would have gone, given my deep-seated disenchantment with the decisions that led to our involvement in those hostilities. But I've always had great respect for those who answered the call, and especially for those who, unlike me, put their country ahead of any personal beliefs. That kind of courage and commitment is the very definition of allegiance (a definition that our political leaders would do well to adopt).

Both my father and his father were doctors in the Army. My stepfather, Don Morin, served for three years in the European theater during World War II, a foot soldier in some of the most brutal and bloodiest battle zones known to man. Today, still ram-rod straight at 89, Don rarely talks about those days, which is not uncommon. Many of Lauri's patients are older men who served in World War II or, more often these days, the Korea War (I refuse to call it a "conflict"). She says that most take a quiet pride in their service -- there was a job to do, and they did it. They didn't "play" war. It wasn't simulated combat on Xbox or PlayStation. It was real life, and far too many lost their lives. Many more carried debilitating scars -- physical, mental and emotional -- the rest of their days. The least we can do is take two days out of the year -- Veterans Day and Memorial Day -- and let these brave men and women know how grateful we are.

That's the root of my disappointment today, on the eve of this essential holiday. So many people, including those who run Shore Country Day and the Valley League, have lost sight of how important it is that we honor those who sacrificed so much so that we can enjoy the lifestyle we have. In my most jaded moments, I think that Shore Country Day parents aren't concerned because they know their precious youngsters will never have to take up arms to protect this country. Cynical? I suppose, but it's hardly a state secret that those at the lower end of the socio-economic ladder typically put their lives on the line for those who profit most from war. It's been that way for centuries.

There was a time when most everyone served, regardless of social status or financial wherewithal. I live in a wealthy community, and I've taken time to visit the war memorial in front of Hamilton's Town Hall. The names etched in those granite blocks come from well-to-do and blue-collar families alike. Would that still hold true today? I have my doubts. This is a town where General George Patton settled, and his son (another General George Patton; note he was not spared military service) lived until his death. We have a Patton Park in the middle of town, complete with a Sherman tank, artillery, and two stone pillars, a gift from France for the efforts of Patton's infantry to liberate that country from Nazi rule. How many children are taught the true human toll that came with the deployment of those weapons?

I'm not saying I'm a proponent of a universal draft, or that everyone must play some part in this country's military-industrial complex (I always thought Muhammed Ali was railroaded for his refusal to be drafted). But I do believe we should have a universal appreciation for those who were willing to risk everything. That's what Veteran's Day is supposed to be. I find it both disheartening and discouraging that so many now apparently take those sacrifices for granted.