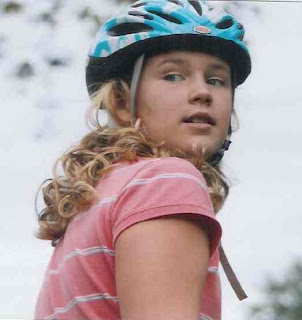 Brynne went bobbing across Route 1A, her golden blond locks sprouting from beneath her cycling helmet, her trusty two-wheeler by her side. I hovered over the crosswalk like some surly gargoyle. With her over-stuffed backpack sagging off her shoulders, Brynne swung a leg over the saddle, and started pedaling down the sidewalk.

I was a wreck. Brynne's elementary school is only a mile away, and there's a police officer at the far crosswalk. This is not a high-risk operation. Yet my stomach was in knots as I walked back home. The juxtaposition between Brynne's joy at her unfettered freedom and my own fretful misery was jarring.

Brynne is my baby, though she would cringe at that description. She's always had a healthy-if-inflated sense of her abilities (the morning she tried cooking omelets when she was all of 5-years-old springs to mind), and sometimes gets in over her head. She's our daredevil. MaryAlyssa, her older sister, is more cautious. Brynne often acts first, thinks second. It's a trait that gives parents gray hair, quickly.

My wife, Lauri, always wanted kids. Never a doubt, and I admired that kind of raw, primitive drive. I, on the other hand, needed convincing. In part, I feared parenthood because I feared this moment. It is the fear of letting go, letting my child loose into the world. I'm not sure where that sense of dread comes from, to be honest. Maybe from losing my dad before I became a teenager, or maybe it's the freshly unearthed memories of my own reckless youth. I remember pedaling through a stop sign., having too much fun going too fast, and forcing some poor, startled woman in a huge station wagon to slam on the brakes. I can still see her face, her eyes practically popping out of their sockets. Maybe my reticence is the result from too many years as a newspaper reporter, when tragedy was part of our daily milieu.

This moment, I knew, was a pristine example of why my mom relied so heavily on her faith. Mom, widowed at 40, raised six of us, and our childish indiscretions must have weighed heavily on her. She knew that parenting, from conception forward, is a constant leap of faith. She often told me: "You let your children go as they grow, but you never stop being a parent."

You prepare your progeny as best you can, and then you bid them adieu, sharing in their bliss as well as their sorrow. Watching Brynne ride off without me was just another reminder.

PS ... A special "Thanks!" to our young neighborhood paparazzi, Charlotte Goodwin, for this wonderful portrait of my Brynne!
Posted by BrionO'C at 6:25 PM No comments: 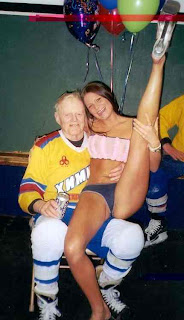 My heart is heavy tonight, because I just learned that a good, good friend is at death's door. Death will take Fred Pearson, as it will eventually take all of us. But I believe, deep in my heart, that Death will take no satisfaction in taking Fred Pearson from us.

Fred Pearson is one of my heroes. Period. Don't be fooled by the accompanying photo, taken on Fred's 83rd birthday a few years back. Sure, it looks randy, but it speaks more to the sophomoric humor that hockey players like to employ to shield how much they really do care about the other guys in the locker room. And, to be perfectly honest, Fred was truly embarrassed by all the fuss, not to mention the "special guest" we plopped in his lap. Fred, frankly, loved everything about hockey, except maybe the Neanderthal humor. He was an Ivy man, through and through. His Yale teams were stuff of legend, and he went on the play in the Olympic Games in St. Mortiz in 1948 (one of the more bizarre chapters of Winter Olympic lore, when the United States actually sent two teams from competing amateur associations). He was a test pilot in the armed forces, and a long-time ad executive for Channel 38 here in Boston. He never married, though we all suspected that he was never lacking for companionship. Fred was also an avid cyclist, and following his retirement, could often be seen pedaling all over Cape Ann and points beyond. When he wasn't playing hockey, that is.

If Frederick Gordon Neil Pearson had one enduring love in his life, it was this beautiful, ephemeral game. He played it with passion, with spit and vinegar, with joy. He roamed the left wing on the North Shore Skating Association skates on Tuesday, Thursday and Saturday for just about as long as I can remember, resplendent in his bright yellow Swedish jersey. I have trouble getting my head around the notion that when I first met Fred, some two decades ago, he was already in his 60s, a good 10 years older than I am now. We had our share of "goal-crease discussions," when Fred insisted on taking one last whack at the puck (dammit, I know the guy was my senior by 30 years, but he was still strong enough to break a few fingers if I didn't remind him to keep the lumber in check!). But I love the guy's spirit, that indomitable spirit, and his willingness to always go into the corner and do the dirty work to get the puck.

I'm not one bit afraid to say how much I loved spending time with Fred Pearson. For the 20-some-odd years that I knew Fred, he would regale us with locker room tales of this game or that, stretching all the way back to his Ivy career at Yale, and the fact that it was his team that snapped Dartmouth's legendary 45-game winning steak in January of 1946. He scored two goals in Yale's epic 6-4 win. Typical Fred; right in the thick of things. Yet whenever I would pester Fred about a possible story about his exploits, he would demure. "Who would want to read about an old codger like me?" was his standard reply.

A few years ago, Joe Bertagna, the Hockey East commissioner and erstwhile scribe, penned a terrific two-part series on hockey legend Jack Riley, a Dartmouth great who felt the sting of Fred Pearson's tenacity in that famous 6-4 Yale victory. Bertagna recalled meeting Pearson for lunch at the 99 Restaurant, and that Fred arrived wearing a tie and sport coat, "not because he was coming from work, but because he was meeting someone for dinner. It just spoke of a different time and place, a different set of values."

However, Bertagna's most telling quote was his next. "When you saw Fred, despite the fact that he was older, you couldn't help but feel like you were looking at a much younger man. He had such a twinkle in his eyes."

Fred Pearson was, in my eyes, forever young, someone who embodied a "joie de vivre" that is so uncommon these days. He was truly a man's man, and I will miss him dearly. Death can go to Hell; Fred won't.