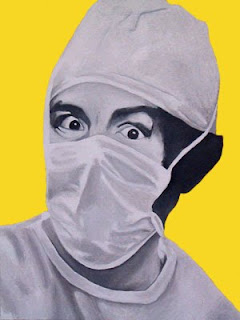 Boston, with spring in full bloom

"Or are we just holding onto the things we don't have anymore?"
-Jack Johnson

Last week, after a six-week wait, I finally got in to see Dr. Henry Frissora, a local specialist in cardiovascular medicine at Beverly Hospital. Frissora was recommended by my ortho guy to rule out the possibility of a "sports hernia." Seems my groin injury is something of an elusive diagnosis, with no one really sure of exactly where the injury is, or what course of treatment to recommend. I've been battling a chronic groin pull for the better part of seven months now, and nothing I seem to do (rest, stretching, massage) seems to be helping the healing process.

I just wanted an answer, even if it was the one thing I didn't want to hear, which was: "We're going to have to operate." My patience had been stretched thin, and my waistline had been stretched to the limit. Seven months of relative inactivity had pushed my fragile middle-age psyche to the uncharted and inhospitable waters. I don't mind being an Old Jock, but being a cranky, calcifying Old Jock is no fun, and no fun to be around. Just ask my bride.

Anyway, turns out Henry "Hank" Frissora is an old buddy of my brother Sean (they did a residency together at New England Deaconess), so we spent the first 10 minutes or so just chit-chatting about family stuff. Then we started in on the particulars of why I was in his office. I'm an old hockey player, a goalie no less. Assorted aches and pains, typical orthopedic foibles, but no major (that I'm aware of) issues, such as a heart condition, high-blood pressure, diabetes, etc. Not taking any medications, other than the occasional horse pill of Ibuprofen. Hurt the groin in a scramble in front of my net early last September. Felt a definite "pop" on the right side. Gave it eight weeks, and started playing again in November. Re-injured it right after Thanksgiving. Haven't done much of anything since, except coaching my daughter's Squirt hockey team, and running the occasional goalie clinic.

All the while, the good doctor scribbled notes, and reiterated the mantra I've been hearing for years: The human body wasn't designed to tolerate this kind of wear and tear over the course of a half-century. Plus, he tells me that injured areas tend to get re-injured with ever-increasing frequency. Essentially, I think Dr. Frissora, in his own polite way, was setting me up for what was coming next.

After rehashing the injury and my subsequent litany of starts-and-stops, he decided to give the old groin an exam. Pushing his fingers into the soft, sensitive tissue covering my pelvis, he asks me to cough several times. I obediently cough, and wince. Cough, wince. I then jumped up on a cold, plastic-covered table, and let Dr. Frissora poke around for another few minutes.

The good news? Dr. Frissora is pretty sure I don't have a sports hernia. That's a relief, since it a sports hernia would have meant certain surgery. The bad news? I waited a month and a half for a specialist to tell me he has no idea what's going on with my groin injury. In fact, he told me there were "70 to 80" different connections -- between muscles, tendons, ligaments, and other connective tissue -- all intersecting at the very spot where my thigh and pelvis join, and it could be any number of those that were out of whack. It could even be a hip problem that's manifesting itself as a groin injury. Not the definitive diagnosis I was hoping for.

So, instead of setting a date for surgery, I get the name of a physical therapist. I'll call him, 'cause I still want answers. I understand what Dr. Frissora is saying. Start thinking about another leisure activity. But I'm not ready to go there. Not just yet. It may be denial, pure and simple, but I've always felt it's easier for doctors to recommend lifestyle changes than it is for the practitioner to give up something he or she truly loves. For now, my love is still blind.