The Truth and Tyler 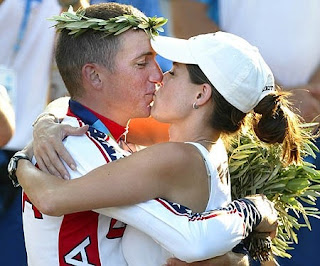 OK, I'm going to try real, real hard to not sound like the angry, exploited journalist here. Tyler Hamilton is, basically, a good guy, one of the most personable athletes I've ever met. It's just a shame that he's also a bald-faced liar. You don't have to take my word for it. You can take Tyler's word.

Anyone who happen to watch tonight's 60 Minutes episode, with Tyler baring his soul to the world about his long-denied use of performance enhancing drugs and blood transfusions, can make their own decisions about the man's honesty. I have my own story.

Tyler is a local guy, born and raised in Marblehead, a product of the Holderness School in New Hampshire, and an NCAA champion cyclist at the University of Colorado in Boulder. I started following him when he latched onto the Subaru-Montgomery squad, the irresistible "local guy makes good" storyline. And then his career took off, aided by his own tough-as-nails performances on the bike and the all-encompassing glow of Lance Armstrong's stunning comeback from cancer and subsequent Tour de France victories.

Hamilton was a loyal lieutenant on Armstrong's US Postal squad for those early wins, and that catapulted him into the stratosphere of European cycling. In 2001, he left US Postal for a huge pay day and a chance to be a team leader with Team CSC. Those years were a roller coaster for Hamilton, marked by bad luck, bad crashes, and heroic efforts, culminating in a 4th place Tour finish in 2003 despite suffering a broken collarbone in an early crash. Clearly, we can't help but question now just how many of those performances were done au natural.

I remember going into my local bike shop shortly after the news broke of Tyler testing positive for doping at the Tour of Spain in 2004. We were all stunned by the news. Hamilton was by that time a legitimate hometown hero, an Olympic gold medalist in the time trial only weeks earlier (The attached photo shows Tyler celebrating is Olympic victory with his then-wife Haven. The two are now divorced). The bike shop owner, a forthright individual with intimate knowledge of the cycling world, stated flatly: "He's guilty. They're all guilty."

That was seven years ago. And those simple two sentences have proven true, again and again and again. Bjarne Riis, Marco Pantani, Jan Ullrich, Hamilton, Alexandre Vinokourov, Floyd Landis, Alberto Contador, and even "the patron" himself, Lance Armstrong. The list goes on and on and on. There are few innocents in the European pro peloton. Very few, if any. And there haven't been for a while. Even those who haven't doped are complicit in their silence. Good guy Frankie Andreu? Guilty. George Hincapie? Guilty. The stain is pervasive.

Now, I'm not saying these are bad people. They understood the rules of the game, and the rules meant that, if they wanted to compete, they had to cheat. As Andreu admitted, he was tired of losing to less talented riders simply because they doped, and he didn't. But these cyclists made that choice. And then they chose to lie about it. To all of us. And in doing so, they've cast a long, dark cloud not only over their sport, but over anyone who chooses to compete in it.

I've interviewed dozen of professional cyclists over the years, including Hamilton on numerous occasions. I've often asked them about doping, and never had a single racer admit to me that he or she doped. Not once. People question why the US Government is spending so much money going after Armstrong. My reaction? We'll at least get to the truth, because people like Hamilton and Hincapie are going to think twice about lying to Uncle Sam. It's unfortunate, but sometimes it takes the threat of prison to get these guys to tell the truth.

In 2006, I spent two hours in Tyler Hamilton's living room high above Boulder, when he hoped to overturn a ruling by USA Cycling to ban him from cycling after his 2004 positive drug test. It was a spectacular mountainside home, bought with a portion of the millions that Hamilton had earned through a gritty career as a cycling domestique, and later the team leader for Team CSC and Phonak. ESPN colleague Shaun Assael and I spoke with Hamilton, his wife, and his attorney at length about the charges, and his claims that he was falsely accused, the result of faulty testing. Tyler flat-out lied to both of us.

Well, he did. It just took him a while to admit it. For years, he tried to parlay his "nice guy" image into duping writers and everyone else into thinking that, somehow, he was the victim. Perhaps, like former teammate Floyd Landis, Hamilton finally got religion. Maybe he wants to jump-start sales of his book. I really don't care. He's still in damage-control mode. Here's the bottom line -- Hamilton doped for selfish reasons, and now he's trying to come clean for selfish reasons.

Journalists often take heat for "making the facts fit the story." But more often, we're the messengers. I conveyed Hamilton's message. And, yes, there once was a time I wanted to believe him. But no longer. And that makes me see red.

Tonight, Hamilton told 60 Minutes, and anyone watching, that he lied to protect the sport, to protect his teammates, his friends, and the staff. Maybe so. But by lying, he also helped perpetuate a corrupt culture that now implicates, rightly or wrongly, almost everyone who participates in this great sport. He also lied to protect himself. I'd like to hear him admit that too.

Addendum (5/23/11): A great deal has been made of the timing of Hamilton's confession, and his decision to air it on national television. Many detractors, like those in the Lance Armstrong camp, say Hamilton did it to bump sales of his forthcoming book. Even if that's not true, Hamilton could take an enormous step toward legitimacy by earmarking any profits of his book sales to his previously embraced charity -- the National Multiple Sclerosis Society -- or any other charity that he has no financial link with. That would get my attention, and prove that Hamilton was serious about cleaning up the sport, and not feathering his own nest. -B
Posted by BrionO'C at 8:26 PM No comments: