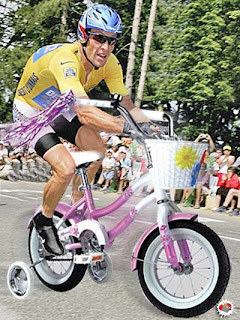 OK, let me get this right out front. I'm in the minority regarding my opinion of Lance Armstrong. I think the guy is a peerless bicycle racer (the best of his generation), and an inspiration to thousands, if not millions, of cancer survivors. I get all that, and I admire Armstrong's myriad accomplishments. The guy is an absolute stud, and I still enjoy watching his Tour de France and World Championship wins. I've interviewed him on a number of occasions, and found him to be charming, clever, charismatic, articulate, and incredibly bright. But that's not enough.

In this day and age, we don't have to settle for athletes who tell us: "Hey, I get it done between the lines." Sorry, but that doesn't completely justify the multi-million pay days that these men and women are collecting. Lance has earned a gazillion dollars through his hard-earned cycling victories and multiple endorsement deals. He's given hope to millions of cancer victims through his Lance Armstrong Foundation. Kudos to him. I don't begrudge him the money, or the acclaim he deserves for his cancer work. Just don't ask me to ignore what a putz he can be, and has been, to friends, teammates, fans, and loved ones.

I always got a kick out of Charles Barkley's "I'm not a role model" commercial for Nike. That's because the message was clear and straightforward: Don't expect sports stars to raise your kids. I get that, and I'm OK with it. The difference with Lance is that he wants it both ways. He wants to be the role model, and collect the ducats and accolades that come with it. But he only wants the celebrity on his terms. Lance is always talking about others having to do "the right thing" (like raising more money for cancer research), yet he doesn't hold himself to the same standards, and he lashes out when people expect that of him. Lance doesn't want people to pry. If anyone - friends, media, fans - does cross him, he'll cut them off at the knees without a second thought. That's just the way the guy is wired.

One of my favorite writers, Roger Angell, once said that athletes "are what they do." I believe that. But when a guy (or woman) is pulling down a hefty seven- or eight-figure salary for his or her athletic feats, we're allowed to expect more. We have every right to judge the entire body of work, not just what Nike or Madison Avenue decide to spoon-feed us. When former Boston slugger Manny Ramirez body-slammed the Red Sox's elderly traveling secretary for not doing his bidding, I was happy to see his steroid-enhanced butt shipped out of town. And when Lance dumps the girlfriend who nurtured him through chemo, dumps the wife who gave birth to his kids, or dumps the celebrity singer/significant other the moment she was diagnosed with breast cancer, we have a right to weigh in on those actions as well. Which is why I've repeatedly said that I'm a fan of Armstrong the cyclist, but not necessarily Armstrong the man.

Am I being judgmental? Without a doubt. Do I have the right? I suppose that's debatable. But I choose to consider the entire package. Lance, as great an athlete and ambassador for cancer research as he is, shouldn't be given a free pass for his shortcomings. Not in my book, anyway ...

The greatest hockey video ever!

I've been thinking about the Red Wings Chris Chelios a lot lately. The fact that the guy is only four years my junior (he's 47, I'm 51), but is still playing hockey in the best league in the world, on one of the best teams in the NHL, simply blows me away.

Today's post-lockout NHL is a young man's game, with its emphasis on speed and skill (as opposed to the clutch-and-grab tactics of the pre-lockout game). Yet Chelios can still compete, employing the veteran wiles amassed over the past two decades (for reference, the Penguins captain, Sidney Crosby, hadn't even been born when Chelios broke into the league!). And though I've never been a big fan of Chelios the player - my favorite Chelios moment is when Flyers goalie Ron Hextall pummeled him after Chelios, as a member of the Canadiens, had cheap-shot Brian Propp during the 1989 playoffs - you've got to admire the man's longevity. The guy's got guts and durability. Heck, I rarely get through my hour-long beer league games or 90-minute pick-up skates without getting bruised and battered, either mentally or emotionally. And that's "no check" hockey! (On the other hand, I probably have a few more post-game beverages!)

Still, I can't think of Chelios without my all-time favorite hockey video coming to mind. While Slap Shot is the uncontested king of hockey movies (and one of the best sports movies ever made), this clip of Chris Chelios waxing nostalgic about childhood coach Jules Winfield (Samuel L. Jackson, reprising his Pulp Fiction hitman character) is absolutely priceless. The goalie sequence is a classic - I may play like the Gimp these days, but I still like to employ a little Billy Smith-style frontier justice every now and then. Plus, I grew up next door to Englewood, New Jersey, so the "Englewood Jack" tactic stirs some fond memories too.

Without a doubt, the clip scores on a number of levels for this old jock. Enjoy! And don't forget to check out Hextall performing the Englewood Jack, flawlessly, on Chelios! ;-) 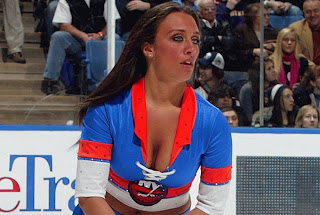 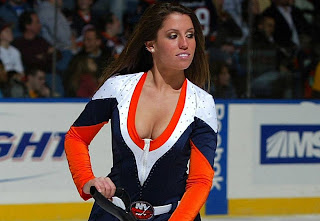 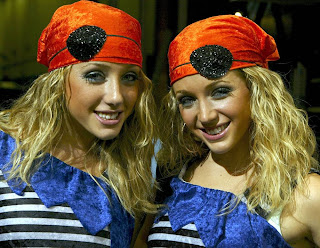 Boston. The ark is almost finished ...

Some friends of mine (well, actually only one) have been blathering on and on about how the NHL's only minor league franchise - the stumbling, bumbling New York Islanders - ought to take junior scoring sensation John Tavares in the annual draft. And that's exactly what GM-in-training Garth Snow did. Now, on paper, that seems like a reasonable enough game plan. But what my friend - Tony "Stale Blog" Davenport - refuses to accept is that Long Island is hockey's version of Purgatory. There is no hope, no future, out in Nassau County. Or, to quote the great Gertrude Stien, "there is no there there." This is where supposedly great players go to have their careers die.

Clearly, Al Arbour made some Faustian pact with Lucifer back in the 1970s. In exchange for a handful of hall of Fame players and four straight Stanley Cup victories in the early 1980s, Coach Al agreed to relegate the franchise to NHL backwater status for the ensuing four decades (if not all of eternity). How bad are the Islanders? They even make their neighbors in Manhattan - the dysfunctional New York Rangers - look like perennial Cup contenders.

Of course, the discriminating hockey fan will want proof of my hypothesis. Well, I haven't been able to confirm reports that Tavares was met by a sign stating "Abandon All Hope, Ye Who Enter Here" above the front door of the crumbling Colosseum. But I think the accompanying three photos pretty much say it all. Obviously, the Islanders are incapable of finding Ice Girls who are even borderline attractive (seriously, not even push-up bras and plunging necklines can help these coyotes). But worse (for Tavares), I'm willing to bet that the moment these she-beasts get their fangs into fresh-meat Johnny T., he'll be running home to Momma in Ottawa, crying like one of Michael Jackson's playmates.

Really, how can the NHL, in good conscience, stand by idly while it entrusts one of the game's great young talents to an organization that can't even find a dozen Ice Girls who don't look like a bunch of extras from some Grade-B Bela Lugosii flick? (Maybe the Islander Ice Girls should think about sporting the same paper-bag head gear that the team's fans, other than Tony, have been wearing for years!) Of course, when you make a deal with the Devil, the consequences can last forever.

Too bad local (Boston) good-guy Scott Gordon has to make something of this mess. I wouldn't want his job!

The Legend of Wilf Cude ... 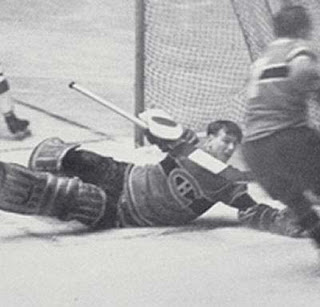 Today I dragged my tired old carcass out of bed at 5 a.m., in order to drive 40 minutes to Phillips Andover and subject myself to a barrage of pucks during 60 minutes of pick-up hockey. My legs were still sore from traipsing all over the hills of Pittsfield, Vermont, this past weekend, but I felt like I needed the workout. Unfortunately, there weren't enough other guys who felt the same way, as only 11 skaters showed for the session. That meant a single sub, and as luck would have it, he wasn't on my side. The results of these skates are pretty predictable ... Everyone wants to conserve energy, which translates into a shooting gallery for the goaltenders. Playing defense requires effort, and if there aren't any subs to bail you out, you're not going to be playing much D. Simple as that. So I spent the better part of the hour flipping and flopping and generally getting beat up pretty good. I decided early on not to keep score, in order to keep my sanity, so don't even ask.

But the juxtaposition of sanity and goaltending got me thinking about one of the most memorable stories I ever read about hockey goaltenders. I remember first hearing about Wilf Cude when I was just a kid, enamored with hockey, and hungry for any tales I could get my paws on. Born July 4, 1910 in South Wales, Cude played in 301 NHL games between 1930-41 for five teams, including the Detroit Red Wings and the Montreal Canadiens. At 135 pounds, Cude was likely the smallest man to ever tend goal as a professional, and was used as a spare throughout his career, loaned to whichever one-netminder team was suddenly in need of a goalie. He managed to play in two All-Star games but lost both, 6-5 and 5-2, though it's unlikely they factored into his unique way of deciding when it was time to retire.

Legend has it that Cude was sitting to a post-game dinner with his wife, his nerves more raw than his steak. Suddenly, and without warning, he picked up the slab of beef and flung it across the room, barely missing Mrs. Cude. The steak plastered against the wall, almost defying gravity. Reportedly, Cude told his wife: "If the steak comes down, I’m through." Cude was an ex-goalie an instant later when the sirloin hit the linoleum.

These days, goalies aren't quite as eccentric as Wilf Cude. Much of that has to do with the protection now available to netminders (Cude, for example, never wore a mask, and his "body armor" was nothing more than felt covered with leather). And although Cude was never forced to deal with slap shots or compositie sticks, it's safe to say that his physical (and emotional) well-being was subjected to near-constant assault. Conversely, goalies today have great gear, and it's been a long time since a puck did any serious damage to me (that's not to say I haven't had my share of hockey-related injuries, but those are more attributable to my lack of flexibility than anything else). Still, the position still brings certain emotional risks, including the inevitable bout of getting shell-shocked and subsequent post-traumatic stress disorder. Forwards and defensemen can screw up without culpability, but a goalie doesn't have that luxury. If we mess up, the puck usually winds up in the back of the net. That, my friends, is pressure. And pressure can do weird things to people.