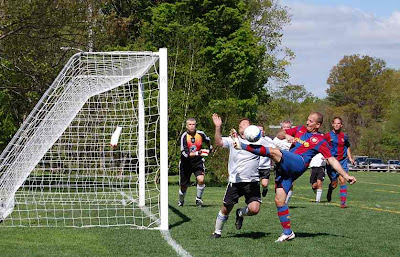 As soccer players, we've endured the subtle whispers and not-so-subtle taunts all our lives. "Only wimps play soccer." Or, "Soccer is for sissies." And, of course, "Soccer isn't a contact sport." Funny how the birdbrains who chirp such misguided blather almost never have the guts to actually play the game. Chances are, they wouldn't last a half. Case in point is Exhibit No. 1, the photo above, of my stalwart right back Tony Passaretti taking one in the mug - and taking one for the team - to prevent a goal in a recent match from the Over-40 masters division of the Over The Hill Soccer League (photo credit goes to our junior paparazzi, Hudson Bates, son of our intrepid team manager). Why the goalie (me) is at the opposite side of the goal requires a long and complicated explanation, which I won't bore you with now. More to the point, Tony is one tough hombre. He's taking more beatings than Chuck "The Bayonne Bleeder" Wepner, and he keeps bouncing back. Tony and I take considerable pride in the fact that we're both on the downside of 50, yet still compete in the Over-40 division. And we have the bumps and bruises to prove it.

Today was no different. On a windswept, rainy morning, our feisty Wen-Ham United squad edged a very good Groton team, 2-1. Almost everyone finished the match covered with grass and dirt stains. Those are a badge, indicative of a good, hard-fought game. And most everyone was smiling afterwards (admittedly, the nicks hurt a little less after a win). But the reality is this: Soccer has always been a contact sport, and that's even more true at the Over-40 level. Almost everyone who shows up is sporting bandages or braces of some sort. Our minds are still relatively nimble, but our feet and reflexes have trouble keeping pace. And being a half-step slower often means getting taken down, or taking someone else down. Most of the guys we play with and against understand this, and the camaraderie within our squad and between teams is pretty special. After all, we all realize how fortunate we are to be running around a soccer pitch first thing Sunday morning. But the games are competitive and lively. Sometimes, they can turn nasty, though that's the exception to the rule. The bottom line is everyone still wants to win. The key to a successful season, frankly, often comes down to having enough players to keep pace with the attrition rate.

The OTHSL runs spring and fall seasons (typically 10 games each, with a two-game playoff). The league, the largest amateur soccer league in the country, is based on the English futbol model, with top teams being promoted to higher divisions, and poorer teams being relegated. We're currently in the 3rd level (of six), and the games definitely get a little more testy as you move up the ladder (must be all those frustrated Types A's!). But pride won't allow you to get relegated without a fight. So despite a slow start to the spring season (dropping our first two games), we've managed to claw our way back into the middle of the pack with a 2-2-2 mark. We intend to stay in the 3rd division, bruises, braces and all!

Brion,
Love the blog. All too true about the slings and arrows we American futbolers have had to endure over the years - I grew up in Pittsburgh where anyone that played soccer was a "F#$^in' pussy scared to take a hit". Good stuff.
Hope to see you next Sunday, hammy permitting.
Cheers, Jeff M.