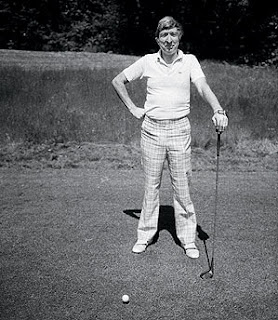 The Hamilton-Wenham Education Fund just sent me an email regarding a fund-raiser/golf outing at the Myopia Hunt Club, which happens to wind around the backside of my little neighborhood here in Hamilton. These folks obviously will invite anybody, or they've never seen the damage I can inflict while trying to hit a golf ball. This quiet, upper-crust enclave (check out the accompanying photo of one of Myopia's more famous duffers, novelist John Updike. Dig those trousers!) barely survived my one round of 18 a few years back, which I wrote about for Delta Airlines.

An eye on Myopia
A venerable Massachusetts club remains a part of US Open lore (June, 2007)

This month, the golf world will descend on Winged Foot in Mamaronek, New York, for the United States Open Championship. Not me, though. I'll be reminiscing about a splendid outing last fall on Boston's North Shore, at the site of the fledgling Open's first standard-bearer.

There are few, if any, pastimes where tradition is cherished more than in golf. Strange, then, that the most popular championship venue in early U.S. Open history is all but forgotten. I guess it’s easy to lose sight of a place called Myopia.

The Myopia Hunt Club in bucolic South Hamilton, Massachusetts, hosted four of the first 14 U.S. Opens, between 1895 and 1908. No other club had hosted more than two in that period, and Shinnecock Hills Golf Club in Southampton, New York (1896), and Baltusrol in New Jersey (1903) held one each during that span. Today, Shinnecock (1995 and 2004 U.S. Opens) and Baltusrol (1993 U.S. Open, 2005 PGA Championship) continue to host elite tournaments. Myopia, conversely, has vanished from the public eye. The old-moneyed club and its deceptively challenging, links-style layout are tucked away behind stately trees and polo fields alongside U.S. Route 1A. At the end of the driveway a discreet yellow sign simply says, “Myopia Hunt Club—Members Only.” Golf isn’t even mentioned. But if you’re ever offered an invitation, accept it. Quickly.

I got lucky. Myopia is practically in my backyard. When a friend who belongs to the club asked if I’d like to play, I didn’t hesitate. During our round, I had Plimptonesque visions of strolling alongside the game’s early giants, like four-time winner Willie Anderson (who won here in 1901 and 1905) or famed 1913 Open champion Francis Ouimet.

The game has changed dramatically since Myopia’s final Open in 1908. Then, clubs featured wooden shafts and were typically assembled by the players themselves. Balls were rudimentary, and often out-of-round. Which might explain why Myopia has the highest 4-round winning score in Open history: Anderson’s 331 in 1901 (he never broke 80, even in the ensuing playoff round). It also lays claim to the highest single Open round ever recorded, a 157 by J.D. Tucker in 1898.

Still, it’s impossible to imagine tiny Myopia hosting such a monstrous event today. It doesn’t have the amenities or the distance, nor does it let its roughs grow to U.S. Open height. “If Tiger Woods played [a U.S. Open] here, his driver would never leave his bag,” says Myopia pro William Safrin.

Compared with current megacourses, this quaint venue is a relic. That’s a compliment. The course is short but demanding, with wild elevation changes, huge amoeba-like bunkers, off-camber fairways and disobedient doglegs. The architects, including Herbert C. Leeds (the designer of record despite building only the second nine holes in 1900), created a masterpiece.

“I think it would be somewhat humbling for the professionals,” says Safrin wryly. Two-time U.S. Open champ Lee Janzen has played Myopia twice, and hasn’t carded a par round.

As for my game there, like Janzen, I’m glad that there wasn’t a gallery. With a score hovering near triple digits (though well under Mr. Tucker's tally), I'd be out of contention regardless of what century I played in. But the course didn't disappoint. Myopia was, and is, a gem.
Posted by BrionO'C at 7:22 AM