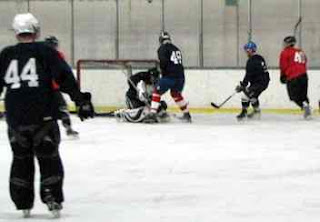 Lately, trying to predict whether I'm going to have a good outing in the nets or a disastrous one is reminiscent of Forrest Gump's proverbial box of chocolates: I simply don't know what I'm "going to get" from this 51-year-old bag of bones and gristle. That goes double for my Friday morning league, the Blades & Breakfast Hockey Club, which convenes at the end of each week at HockeyTown in Saugus, on historic Route 1. I used to be a morning person, but that was before kids, a mortgage, work, blah, blah, blah. I still don't sleep late, ever, but sometimes the alarm at 5:10 in the morning sounds more like a jackhammer. Today, though, was a genuine aberration, and a classic example that my performances defy the laws of predictability.

I got to bed later than I would have liked, after taking a little extra time with my post regarding Mom (see below). In fact, I decided I'd dedicate the game to Mom, who had always been so supportive and influential in my pursuit of sports (provided I got my homework done). I slept well, which doesn't always happen these days, and felt pretty good when the alarm sounded. My legs were a little stiff from my Thursday afternoon skate, but nothing out of the norm. I got to the rink in plenty of time, despite a late start, and actually was on the ice before the refs (definitely a rarity). I felt pretty good after doing a quick stretch, and got into the game pretty quickly with a shoulder save off a nice wrist shot just below the right face-off dot. Moments later, though, my game proceeded to inexplicably fall apart. I let a soft shot bounce awkwardly off my stick, with the puck landing perfectly on an opponent's blade. 1-0. The next two goals were nice shots, one from behind a screen, and the second a sharp cross-crease move that went back against the grain. The fact that it came with about 10 seconds left in the period was a back-breaker, and a harbinger of things to come.

The second period was something out of the Twilight Zone. My D let an opponent walk into the high slot, but deflected the shot over me and the net. I had come out to challenge the shooter, and then watched almost helplessly as the same guy took the rebound off the back boards and tucked it into the net. I was conscious during the entire play, but just ... couldn't ... get ... my ... body ... to ... move. I swear, it almost felt like an out-of-body experience. Even after my guys rallied to get us within two, at 4-2, I seemed determined to give this game away. I flubbed a soft shot with my glove, depositing it right on my opponent's stick. 5-2. A weak effort on a wrap-around made the score 6-3, and I could hear the Fat Lady starting to sing. It didn't matter that I knew what to do ... I just couldn't seem to get my body to cooperate. (The photo above shows one of the three saves I did manage to make! Thanks, Fluff!)

We got as close as 6-4, which is a tribute to my team, but the final, after a weird shot from the point slipped in under the crossbar, was 7-4. As if I needed salt rubbed into my wounds, the opposing goalie was a sub who I had been coaching at a local adult goalie clinic. "Thanks for all the great advice," he joked afterward. "You know what they say," I shot back, "Those who can't do, teach."

To make matters worse, this is a league game, not just some pick-up skate where the score doesn't really matter. Though it's a fun league -- the best collection of hockey guys I've ever been associated with -- the idea is still to win. And this loss was all on me. End of story. Goalies always feel responsible for losses, whether it's their fault or not. That just comes with the territory. But today I owned this loss, and I knew it. I just didn't have it. I could almost see Mom rolling her eyes, saying: "Hey, next time you play for me, try to bring your 'A' game, OK?" Deal, Mom, though I can't make any promises ...
Posted by BrionO'C at 1:24 PM

Homie, all I'm gonna say is this... I have been climbing, on average, 4 days a week per year for over 22 years now. One thing I've learned is (once I graduated from the ridiculous ideal that I should get better EVERY time I go out) is that, well, you just have those days. Tending net at 51? Sweet. Even the King needed a miracle to win tonight brother. Just keep getting out there. The game was a loss on one level - a victory on many more...

No, No, I must get better each and every time out!!!

Ha! Ha! So NOT going to happen! Thanks for checking in, bro. My consolation was that Cam Ward and the Carolina Hurricanes got shelled by Sid the Kid's Pittsburgh Penguins by an identical 7-4 score Thursday night. However, I think it's safe to say, the shot quality was a bit higher ... !