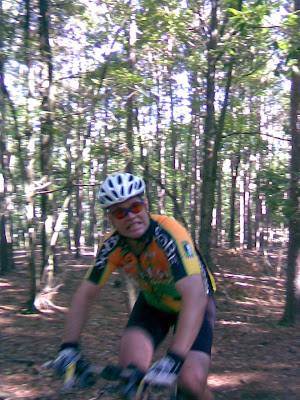 I admit it ... I'd almost forgotten. The sweet, cool breezes of early autumn and splintered sunlight filtering through the trees. That distinct loamy smell of the earth, and the absence of bugs. The sublime thrill of fat tires on skinny trails winding like a roller coaster through the woods. I'd almost forgotten how quickly your breathing becomes labored the moment those trails tilt uphill. The nuisance roots and rocks that litter New England's rugged landscape. And I'd almost forgotten the spontaneous laughter that erupts when it all comes together.

Yes, the memories had faded. In the four years since I trashed my right shoulder after augering my bike's front wheel in a washed-out section of trail, and gone flying over the handlebars, I'd taken a self-imposed sabbatical from the singletrack. I had dabbled here and there, but I'd lost my nerve, frankly. I was scared. Scared of every slick, off-camber root or tire-grabbing chunk of granite that might send me to the ground or into a tree, and eventually the Emergency Room, again. Between hockey and mountain biking, I'd suffered a litany of injuries that had me feeling my age. The shoulder was the worst of the recent vintage, though, and I began contemplating more genteel pursuits.

I turned to the road bike, not so much because I enjoyed it more, but because I felt like I had more control. The irony, of course, is that, among my cycling friends, road accidents typically have proven to be much more devastating. My thinking was (and this is probably as good an indication as I can offer of how far my confidence had sunk), if I tumbled on the road, someone would eventually find me, and help me get back home. In the woods, I could lie there for days. Ridiculous? Of course. But that's the mindset of a rider who has lost his bravado.

Fortunately, my friends wouldn't let me fade away. They kept prodding me to join them, luring me with tales of new trails being carved in nearby parks, Bradley Palmer and Willowdale. Eventually, they wore me down, and I relented. I suited up Sunday with a fair amount of trepidation, but the morning was so damned beautiful it was hard to feel too negative about anything. I asked my buddies -- Billy E. and Mark O. -- to go easy on me. Not only was I venturing back into the woods after a long hiatus, but I was also riding on a bum right hip, compliments of a recently diagnosed torn labrum. It didn't hurt while I was riding, unless the incline got real steep, or unless I had to get off the bike. Which I did. Often.

It was a strange sensation. I spied old, familiar obstacles that I'd cleared easily in years gone by, but I was unable to stop myself from stopping. I realized this was going to be a slow process. I told myself to be patient, even as I publicly admonished myself for being such a wuss. I was the ride's anchor, but Billy and Mark never once made me feel like I as holding them up. Every time I apologized, they would just look around, and comment on what a gorgeous day it was. The support was a huge boost. So were the trails, which had been cut with an artist's flare.

I started to link some sections together, started to look where I wanted to go (instead of focusing on the trail's not-so-hidden dangers), started to reconnect with my Fat Beat's supple Ti feel. I started, even so subtly, to feel that flow train. I was back. Not all the way, but back nonetheless. I was still riding like the Sketch King, but I was riding. Off-road. And smiling just about the entire time.