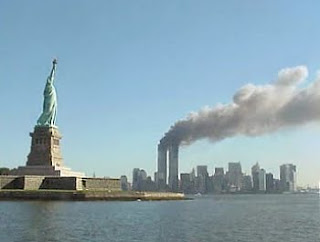 Nine years ago this morning, I was hunkered down in my basement office, furiously tapping away at the keyboard, trying to wrap up a story before my scheduled flight the next day. Lauri called me after dropping the girls off at day care, asking if I'd heard the news -- a plane had flown into the World Trade Center in New York. I hadn't, but my immediate reaction was that it must have been a small, single-prop craft. Maybe a lunatic, maybe just an awful accident. Like the rest of us, my mind wouldn't even consider the reality that eventually came to pass.

I went upstairs, flipped on the tube, and watched the horror unfold. By that time, the second airliner had flown into the South Tower of the WTC, and all hell was breaking loose in Manhattan. I sat there, dumbfounded, unable to comprehend what was happening right before my eyes. Terrorism had taken on an entirely new meaning. When the TV anchors announced that the second jet was United Flight 175, a chill knifed through me like a bony finger of the Grim Reaper. United Flight 175 was my flight the next day. Although I was on assignment for Continental, my trip was organized by the Hawaiian tourism office, and they booked me on United, flying direct to Los Angeles, then to Hawaii.

My mood immediately shifted from disbelief to ashen. I was actually shaking, watching the coverage. My story didn't get done. And my flight, and trip, were canceled. My life, like the lives of countless thousands, was changed forever. So had the world as we knew it. And we're reminded of it every time we fly, every time we wait in a security line. Our daughters, thankfully, were too young to comprehend the depth of the evil on display that day. Lauri, my wife, was understandably distraught. I, for some odd reason, was simply numb.

That night, I played hockey down at the local prep school. I hadn't planned to, but needed to do something to shake myself out of my stupor. So I grabbed my gear, drove down to the rink, and got into the first fist fight I could recall since high school. It was stupid, a reflection, I'm sure, of the tension that everyone was feeling that night. Not even hockey, a game that was my great escape for most of my life, could provide any refuge.

A month later, I flew to Denver, Colorado, to meet my brothers Matt and Mike. We were headed to the High Lonesome Lodge on the western slopes of the Rockies, and along the way the United States unleashed its military fury on Bagdad. When we arrived at the High Lonesome Lodge, the place looked like a ghost town. Buzz Cox, the manager, explained that the lodge had been booked solid by Cantor-Fitzgerald, the finance firm devastated by the 9/11 attacks.

Americans, to this day, are justifiably outraged at the murderous acts of Sept. 11, 2001. Like most, I will never forget. But I also try to remember how fortunate I was, of the difference that 24 hours can make. Did God "spare" me? I don't think so, because that would insinuate He didn't spare the 2,977 people who tragically lost their lives that day (and the 19 hijackers He allowed to live long enough to perpetrate such a heinous act). Sometimes I think the Almighty simply sets things in motion, and then lets the chips fall. Why wasn't I on that flight, along with Ace Bailey and Mark Bavis of the Los Angeles Kings and 63 others? It was just fate; the luck of the draw. It's a cruel reminder that none of us are guaranteed anything. Ever.

Which is why we should celebrate everything we do have, and never once take the things we hold dear for granted. I get to enjoy this stunning Saturday morning, and plan to go for a bike ride the minute I get this essay posted. Today, I'll hug my bride and our girls a little more tightly. I'd like to say I do that every day, but I don't. Life, with all its challenges, tends to dull the immediacy of these moments. But every now and then I'm reminded. I need that.