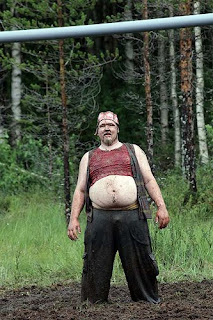 I've played organized sports for pretty much my entire life, a good 45 of my 52 years. There have been plenty of ups and downs, and even the occasional title. I think there was a baseball and basketball championship during grade school, though I'm not sure, to be honest. There was the city championship for my Manchester Central High soccer team my junior year, in the fall of 1974, and the glorious intramural hockey championship at UNH in the winter of 1982 (in which I gladly traded in a night of studying for a statistics mid-term for a night of revelry with my teammates after the narrow but well-deserved 4-3 win)

But, in all those years, I've never been part of an undefeated team, until now.

This past week, the venerable Ipswich Sea Dogs of the Over the Hill Soccer League completed a nice run of the table, finishing their regular season with a sparkling 10-0-0 mark. It wasn't a "perfect" season per se -- only someone truly deluded would think anything that starts with "Over 50" could be perfect -- but our record was. Ten straight wins. It was fun to be a part of. I came to the team late, a last-minute signing. For the past five years or so, I'd played in the Over-40 division, with a great group of guys who called themselves Ipswich United (and more recently, Wen-Ham United), among other various nicknames. But my litany of injuries (hamstring pull, back spasms, tennis elbow, dislocated finger, groin pull) made my participation, and performance, somewhat unpredictable, and I encouraged Captain Dan Bates to find another keeper.

Plus, I'm now 52, and my body was telling me that it was time to "move up" the the Over-50 division (no, that's not actually me in the accompanying photo ... just a reasonable facsimile!). I started feeling like a calcified Chris Chelios of NHL fame, chasing after a young and spry Sidney Crosby, with much less success, I might add. After missing Wen-Ham United's entire fall season, I made a few phone calls, and landed a back-up role with the Ipswich Sea Dogs. Truth is, the Sea Dogs resident goalie, Doug Plante, was also the team manager, and quickly 'fessed up that he'd rather play in the field. So, in short order, I became the starting 'keeper for this orange-clad squad that resembled the United Nations of old-guy soccer.

We have guys from England, Vietnam, Chile, France, Trinidad, Greece, Syria, and God only knows where else. We have architects, laborers, biologists, craftsmen, salesmen, computer geeks, business owners, you name it. I'm the token Irishman and writer (and resident tech idiot). But the beauty of sport is nationalities, and professions, don't matter. Personalities are what make a team mesh, and we've got a wonderful group of guys who are still passionate about this great game. Not "perfect," but close enough. The play was a shade slower than my Over-40 campaigns, but feisty nonetheless. We're a group that plays hard, but plays fair. And that proved a winning formula, as we ran the table on the regular season. And, truth be told, this team probably would have gone undefeated with a bunch of Munchkins alternating in goal. I had a few saves over the course of my seven games, including a few solid stops, but I was never besieged. Not that I'm complaining.

Our first playoff game pitted the Sea Dogs against the appropriately named North Read Gray Cobras. I made two decent saves early on, and we managed to squeeze out a 2-0 win, despite my misplaying a long shot that caromed off the crossbar, forcing my stalwart sweeper Sergio to clear the ball off the line. Next week, we play in the finals, but I'll be far, far away, boating in the British Virgin Islands. It's one of those dream assignments, especially since I get to take Lauri with me. But I'll have bittersweet feelings just the same, knowing that I won't be there in goal for my boys, the Sea Dogs. My only perfect team!