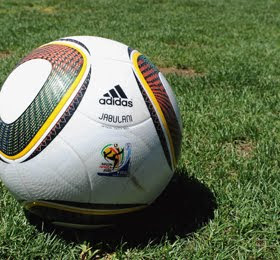 OK, I promise to be a little more positive today, and why not? The best sporting event anywhere gets under way today, as the World Cup kicks off in South Africa. I did a web advance for Four Seasons magazine on the Top Ten reasons to check out the action. The one thing I neglected to mention was the much-maligned Jabulani ball by Adidas (at right), which all the goalkeepers are complaining about. Of course, goalies need something to whine about, since they spend all game just standing around! Here's my unabridged version ...

The FIFA World Cup, the quadrennial celebration of the sport known worldwide as football (and soccer in North America), is heading south of the equator this summer. For the first time ever, the world's most popular sporting event will be held on the continent of Africa, in the Republic of South Africa. The tournament began in 1930, and except for World War II (1942 and 1946), has been held every four years since. Brazil, which will host the 2014 World Cup, has won five of the 18 tournaments. Italy, the defending champions, has won four times, and Germany three. Impressive numbers. Want more? Here are 10 reasons to watch.

One. It is, simply, the biggest stage in all of sports. Period. The tournament boasts 32 teams from around the world (pared down from 210 nations during two years of qualifying play) – a truly international field representing an unequaled collection of soccer talent – converging on a single country. The month-long World Cup features a total of 64 games, with 48 "group" matches followed by 16 knockout games. The finals are set for July 11, at Soccer City Stadium in Johannesburg.

Three. The power of emotion, driven by national pride. These stars aren't only the most skilled in the world; they're among the wealthiest athletes on the planet. But they're not playing for a payday. They're playing for honor, for country, and, in many instances, immortality, both home and abroad.

Four. The World Cup can be a dazzling rite of passage, with fresh talent – brilliantly gifted but too young to know any fear – showcasing their wares before the world. Such was the case for 17-year-old Edison Arantes do Nascimento, better known as Pele, when he won his first World Cup with Brazil in 1958 against Sweden. Who are the new stars? Watch for Javier "El Chicharito" Hernandez and Giovani Dos Santos of Mexico, Jozy Altidore of the United States, Eljero Elia of Netherlands, and Angel Di Maria of Argentina.

Five. The opportunity to see something truly breathtaking. Some moments are famous, such as the logic-defying save by England's Gordon Banks of a header by Brazil's incomparable Pele during the 1970 World Cup in Mexico City, Brazil's Carlos Alberto's laser strike against Italy in the finals that same year, or France's legendary Zinadine Zidane imposing his will on Brazil in 1998 during a 3-0 victory that secured the only World Cup won by Les Bleus. Some are infamous, such as the "Hand of God" goal scored by Diego Maradona of Argentina (with his hand) against England in 1986, or Zidane's bizarre meltdown when he head-butted an Italian defender in the 2006 final, possibly costing France a second title.

Six. Intriguing match-ups. The opening contest on June 11 – between Mexico and host South Africa – may reveal whether either team is a contender or pretender. The Group C match between England and the United States marks the 60th anniversary of one of the World Cup's most memorable upsets (a 1-0 US victory in 1950). Group G, with Brazil, Portugal, Cameroon and North Korea has been dubbed the "Group of Death," since at least one very good team will not advance. Plus, every team from every World Cup final since 1966 is in the field, a harbinger of epic battles between long-time adversaries during the knockout rounds.

Seven. The ever-present possibility of an upset. Rarely do all the draws go according to plan, and trying to find the sleepers in the field of 32 is an odds-maker's nightmare For proof, consider the 2009 Federations Cup, a dress rehearsal for this year's World Cup. Spain came in riding a 35-game unbeaten streak, and the No. 1 ranking in the world. The Spaniards were poised to make it 36 straight against a United States squad that was playing like second-tier competition. The result? A dramatic 2-0 victory for the Americans. In 2002, the Republic of Korea made a gallant-but-improbable run to the semifinals (with wins over Italy, Portugal and Spain) on home soil. Could South Africa's Bafana Bafana, led by the sublime Steven Pienaar (Everton), make a similar run to silence their detractors?

Eight. Who has home-field advantage? The World Cup has traditionally gone to countries that reside at least close to the host nation, notably Italy in 2006 (Germany), France in 1998 (France), Germany in 1982 (Spain), England in 1966 (England), and Argentina in 1986 (Mexico) and 1978 (Argentina). But there have been notable exceptions as well, such as Brazil in 2002 (Japan/South Korea), in 1994 (United States) and in 1958 (Sweden). South Africa, meanwhile, is a wild card. The smart money may be on Brazil's Samba Kings, as they've proven themselves to be historically road worthy. But don't count out traditional heavyweights Argentina, Italy, and Germany, all of which can win ugly, and the resurgent squads from Spain, Portugal, and the Netherlands.

Nine. The host nation, long known as a symbol of divisiveness and apartheid, is now poised to show the world it can take on the role as a great unifier. Persistent questions lingered prior to the event whether the organizing committee, and the 10 stadiums, would be ready. Time will tell.

Ten: You won't be alone. Millions and millions of fans, from the passionate to the casual, are expected to tune in to the games. So many, in fact, that it's impossible to calculate, or even estimate with any accuracy, how many viewers will be watching.