Soccer is for hard men, Part 3 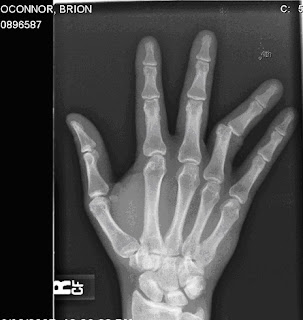 A splitter day in Beantown!

With all the buzz surrounding the upcoming World Cup, it's inevitable that the soccer-haters are coming out of their narrow-minded closets to make fun of a sport they either (A) don't understand, or (B) secretly fear, 'cause they know they wouldn't be any good at it (or, more likely, would have a heart attack trying to play, given the typical circumference of their waists). I have no problem shrugging off their lame-brain comments ... A quick, "Oh, you think it's easy? Come on out and play with us sometime" is an easy way to short-circuit their short-sighted arguments.

Others complain about the lack of scoring, which always makes me think "If it were easy, everyone would be doing it." I've pretty much given up trying to convey that the very fact that goals are so rare, so difficult to come by, is what creates the exquisite tension that puts true fans on the edge of their seats. There are usually dozens, if not hundreds, of great plays in every game that don't result in the ball crossing the goal line, but they're great plays nonetheless.

Still, what annoys me most is when these sports "expects" insinuate that soccer players aren't tough. The theatrics of most South American (excluding the great Lionel Messi) and Inter Milan players aside, futbol players often take a pounding. I'll admit the occasional flop, and I don't like seeing them (in fact, I love it when an opponent gets in a flopper's face, embarrassing them for embarrassing the game). But most replays reveal fouls, and often hard fouls. Which, of course, got me thinking of this essay I did a little while back for the wonderfully titled GeezerJock magazine (later renamed Masters Athlete). Just another piece of evidence that soccer is, indeed, a contact sport.

It only hurts when it hurts

“How the heck do you hurt your hand playing soccer,” asks my older brother, the orthopedic surgeon, obviously amused. “Aren’t you supposed to use your feet?”

Very funny. I’ve become accustomed to these little digs, given my penchant for injuries and my refusal to stop playing the sports that put me in harm’s way. The worst moments are the Emergency Room visits. I'll never forget the day, 10 years ago, when my poor wife, eight months pregnant with our first child, drove me to the ER after a mountain bike mishap. I won't bore you with the details, except to say that it took eight stitches to close the gash on my right cheek, just below the eye (I still have no idea where that tree branch came from!). The doctor that day took one look at my swollen puss, glanced at my chart, and quipped condescendingly: “Mountain bike accident, huh? Shouldn’t you know better at your age?”

The fact that he made the comment more than a decade ago tells you what I thought of his advice. A few months shy of my personal half-century mark (now that puts things in perspective), I still run, ski, snowboard, cycle (off- and on-road), skate a few nights a week in various hockey leagues, and play goalie for an Over-40 soccer team. We play in Boston’s Over the Hill Soccer League, a name that conveys the same gravity and levity as, well, the name of this publication.

This past summer, our squad was asked to participate in an invitational match – a “friendly” – against a team from Gloucester during the city’s St. Peter’s Festival. Not 10 minutes into the second half, with our guys nursing a 2-1 lead, a Gloucester player made a nice move on the end line, and sent a sharp pass across the penalty box. Admittedly, 20 years ago, I might have gotten to the ball a bit faster. Then again, the attacking striker probably would have been quicker as well. In an instant, my hands, the soccer ball, and the striker's foot came together at the exact same moment. The foot won, as my opponent connected squarely with the ball, mashing the outside three fingers of my right hand in the process. Pain ripped through my arm like an electric current. Worst of all, the guy scored.

I immediately knew I was hurt, but had no idea how bad. A teammate rushed up, asking: "What's wrong?"

As I grimaced, face down in the grass, another teammate removed my padded goalie gloves. All I heard was: “Oh, that’s what’s wrong.” When I finally worked up the nerve, I peeked at my right hand, and saw my ring finger bent unnaturally at a right angle, sideways. Someone's wife called 9-1-1, and I found myself the embarrassed center of attention as I slowly trudged off the field. The first responders took one look at my crooked digit, and said, legally, they couldn’t touch me. A paramedic, who didn’t have the same liability headaches, tried to pop the joint back into place, but to no avail (though he succeeded in dropping me to my knees). So I click-clacked in my cleats across the asphalt parking lot and sheepishly took a seat in an awaiting ambulance.

Heading to the hospital, I thought an ambulance ride was justified for shredded knee ligaments or other major injuries, but making such a fuss over a dislocated finger seemed goofy. The attitude of the ER staff didn’t help. Granted, a 40-something guy in a soccer outfit will elicit giggles, but I would have appreciated some self-control, especially since most members of the staff were noticeably overweight (an oddly common occurrence at hospitals).

My ER doctor, however, was completely empathetic. A short, spry women with running shoes and a lilting Irish accent, she checked out the finger, ordered X-rays, and said she'd be back in a jiffy to straighten things out. Self-consciously, I made a comment about feeling silly, playing a kid's game at my age.

"At least you're out there," she replied without hesitation. "That’s the important thing."

She was right. I'll be back on the field, once the hand heals, and if I can avoid any return trips to the ER. After all, the boys rallied to win the Gloucester game, and I don't want them thinking I'm expendable.