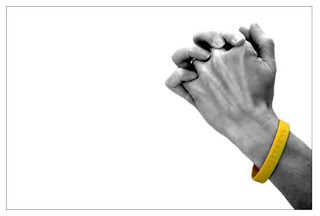 Lance Armstrong has been on my mind a fair amount this past week or so, primarily because I'm a cycling fan, and a Tour de France fan, and you can't watch the Tour coverage without being inundated with Lance images and interviews. Obviously, judging from the responses I've received from my few blog and FaceBook postings regarding Lance, no one is ambivalent about our country's premier cyclist/cancer crusader. The man is a strong personality, and he elicits strong emotions. Being a seven-time Tour champion, a World Champion, and a cancer survivor almost guarantees that Armstrong demands an audience. Sometimes he welcomes the attention, and sometimes he doesn't. It's all part of the man's very complex make-up.

So yesterday, as I was collecting my thoughts between sessions of a goaltending camp I've been working, I found myself absent-mindedly playing with the two rubber bracelets that I wear on my right wrist. There's a pink one, in honor of my Mom, which states "Breast Cancer Awareness" and "Find a Cure." The second is in honor of my Dad. It is a yellow "LiveStrong" bracelet, made famous by Lance and by Nike. Some people who know my reservations about Lance are surprised that I wear this bracelet. Instead, I think it reveals the quandary I face regarding Armstrong. He is a remarkable person: driven, intelligent, charismatic, aloof, funny, and fierce. He defies easy definition (granted, most people are more complicated than advertised, but Armstrong more so than most). As I've stated on numerous occasions, I admire the man's many accomplishments, not the least of which is overcoming cancer's death sentence and creating the Lance Armstrong Foundation. I believe in his message. I just wish I liked "the man" a little more.

I've never been an "ends justify the means" kind of guy. Many people willingly (or unwittingly) look past Armstrong's foibles (and there are many) because he's a great cyclist, and because he's raised millions of dollars for cancer research. Again, those are laudable achievements. I just have trouble separating the man's less desirable traits. Which leaves me a bit conflicted, and even a tad disappointed. See, I want to like Armstrong more than I do. I want him to be a true hero, somebody truly worthy of the deluge of praise. But his arrogance, and especially his vindictiveness, make that an all-but-impossible task.

If actions truly speak louder than words, then Armstrong supporters and detractors both have plenty of ammunition. In the much-debated 14th stage of this year's Tour, Lance's Team Astana clearly helped prevent longtime Armstrong friend and lieutenant George Hincapie from capturing the yellow jersey. It would have been a nice tribute for a man who has worked so hard for so many riders over his long and honorable career. And, like Armstrong, it was a multi-faceted bit of racing, and there was plenty of responsibility to go around when Hincapie fell five seconds short of his goal. But the fact that Astana took up the chase early and consistently speaks for itself, despite Armstrong's assertions to the contrary. Was I calling Armstrong a liar? Not really. I simply didn't believe him. I understand there's a certain level of gamesmanship that comes with the territory of big-time bike racing, and Lance is the peloton's best practitioner of that subtle art.

Anyway, I think the whole episode just goes to show how complicated people, and life, can be. That's why, despite my misgivings about Armstrong the person, I still wear his LiveStrong band. I have my flaws, God knows, and I'd be disappointed if anyone judged me solely on those. Armstrong has done great things in his 37 years, and reached levels of success I can't even dream of. I just wish his track record wasn't quite so checkered.

OK, I didn't watch this stage, I only read about it on VeloNews, and none of their commentary hinted at your theory. They blamed the chase on other teams (Garmin and ?????). VeloNews did get some letters that agreed with you. So, you got me.

I think we can all agree that Lance skipping the team's victory dinner showed poor taste. Clearly, he and Contador have no time for each other. That relationship was doomed from the beginning, and was a constant distraction. I'm sure LA is relieved that's all over.

Is he perfect? Is he the Tom Brady of cycling? No, not quite. But, I also think you know what you're getting with LA. There's no smoke-and-mirrors with him, and I appreciate that.