The Beast of Provence ... 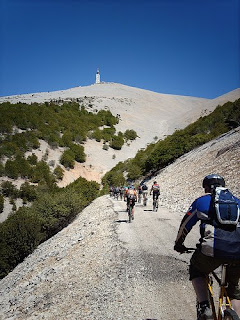 As I watched the penultimate stage of the Tour de France today, I was struck by the similarity of Mount Ventoux - the Beast of Provence, to the right - and New Hampshire's own Mount Washington. Right down to the howling winds and the weather station that occupies an otherwise barren summit (though the French version is much more, shall we say, erect). Phil Liggett's spot-on description of Ventoux above treeline (a "moonscape") works just as well for The Rockpile above Pinkham Notch, New Hampshire.

So what is it, exactly, that draws cyclists to these brutal, windswept places? Clearly, the climbing stages of Le Tour were among the most popular (probably because someone not named Mark Cavendish had a chance to win). I can understand the attraction for spectators. After all, pain and suffering always make for great theater. And nobody digs deeper than the Tour's mountain climbers, mountain goats like Contador, Schleck and Armstrong. But for the participants, an assault on the Ventoux or Mount Washington promises only misery, topped with a dollop of achievement once the task is completed. I guess that dollop makes all the agony worthwhile.

How else can I explain why I keep returning to Mount Washington in August for the Auto Road Hillclimb? It takes me twice as long to reach the summit compared to the winners, and I often pay for those two hours in the saddle for weeks afterwards. Still, the sheer exhilaration upon crossing the finish line is just about impossible to describe. Last year, I was cold - probably hypothermia - and bonking as bad as I ever have. Totally wasted. I barely unclipped from my pedals (narrowly avoiding an embarrassing pratfall) before tossing my bike aside and rushing to the weather station to seek refuge. Actually, rushing isn't the correct word .. "stumbling" is much more apt. Yet, by the time my good buddy Scott Millimet and I made it back down to the foot of the mountain, I was already talking about this year's race.

Weird, huh? Wish I had a better explanation ...