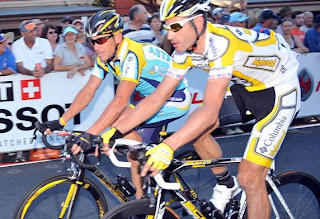 People who know me know I have my reservations about Lance Armstrong. I've always acknowledged and admired him as a great winner, but not a great champion. The word "champion" carries far more weight and responsibility, and Lance has fallen far short of those standards. The man is absolutely ruthless, a cold-hearted killer who doesn't care who he tramples on in his quest for personal (and it is personal) glory. If you want proof of just how cut-throat Lance can be, all you need to do is look at the results from today's 14th stage of the Tour de France.

American George Hincapie is about as loyal a lieutenant and friend as any team leader could ask for. He worked his tail off for each of Armstrong's seven Tour victories, sacrificing personal accomplishments for the good of Lance and their dominating Postal Service/Discovery team. After Armstrong retired, following his 7th Tour crown, and Discovery opted to leave the sport, Hincapie shopped his services, and found a home with another American-based group, Team Columbia-High Road. At 36, Hincapie is racing in his 14th Tour de France, and is still an invaluable member of his team, even though he's only won a single stage in all those years. He is one of the most respected and admired riders in the pro peloton. None of this matters to Armstrong, apparently.

How does Lance repay Hincapie for all those years of loyal service? By ordering his Astana team to effectively reel in the breakaway that Hincapie was in today. For some four hours, Hincapie was the virtual leader of the Tour, on the road. He had to finish 5 minutes and 40 seconds ahead of the current race leader Rinaldo Nocentini of Team AG2R to don the famed Maillot Jaune. And Lance wasn't going to let that happen. Here's the important thing to remember: Neither Hincapie nor Italy's Nocentini are a threat to win the overall title. No matter who was wearing the yellow jersey tonight, they would undoubtedly relinquish it tomorrow during the first serious incline of the Alps stages.

Clearly, though, the thought of a day in yellow for Hincapie was too much for Armstrong to stomach. He decided that another American wasn't going to enjoy that moment, not even for 24 hours. Forget the years of tireless effort as a domestique, and the seven Tour crowns Hincapie helped Lance win. That's the past, and it counts for nothing. Instead, Armstrong ordered his powerhouse Astana to ride a strong tempo to keep the breakaway close. And make no mistake about it ... this was Armstrong's decision. He is the straw that stirs the Astana drink (good luck to Alberto Contador!). Armstrong wanted Nocentini in yellow, plain and simple, because then Lance doesn't need to share the limelight back home.

Here's an ironic twist. Armstrong wants Americans to be bigger fans of cycling. He wants cycling to be big in the United States (actually, HE wants to be big, and I suspect he resents, in Texas-size portions, any other USA rider who might challenge his supremacy in the American marketplace). But armed with better knowledge of the sport, well-versed American cycling fans are able to pierce that velvety, charismatic veneer that Armstrong wants to present publicly. They understand race tactics, and can see through Lance's sham. Armstrong's intentions today were clear and direct, and loathsome. This is the true measure of the man. Even more insulting, he tried to throw another American squad - Team Garmin - under the bus, saying he really did want Hincapie in yellow, and figured it was some personal feud between those two squads. I don't believe it. In Lance's world, there's only room in the American mindset for one American cyclist, and that rider is Armstrong. Every one else is cannon fodder. Had Armstrong not ordered the original Astana chase, Hincapie would be in yellow this evening.

Seems Lance's first book title was dead on. It's not about the bike. It's about Lance. Always. I wish George Hincapie well. He showed great restraint in his post-race interview, only saying how mystified he was by Astana's tactics. His disappointment was evident, and the sting of Armstrong's betrayal was palpable. Hincapie is the true class of the peloton. Sadly, the same can't be said for Armstrong. Even if Lance wins Title No. 8, it will always be tarnished, at least in my mind. Does Armstrong care? Not one bit. Because he knows Americans don't care either. They won't dig deep enough to see his true colors. But Hincapie (just like Tyler Hamilton and Floyd Landis and Kevin Livingston and others before him) know better. And I'd much rather side with those guys.