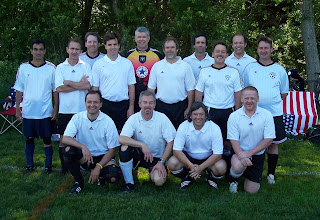 Sporting a .500 record in one of the toughest divisions of the Over The Hill Soccer League, with five teams battling in out to stay "up" in Div. 3, my Wen-Ham United Football Club needed a win this past Sunday to ensure we would once again avoid relegation. And our scrappy squad did just that, edging a tough P.A.C. Lowell team by a 1-0 score after veteran midfielder Billy Waslick slotted home a penalty shot late in the second half.

It was essentially a game of attrition, as our opponents only had a single sub. Still, Lowell was a very capable squad, and pressured the WHUFC goal with a few nice runs in the first half. Thanks to a boneheaded decision by the Wen-Ham keeper (that would be me), punching the ball on a misguided cross instead of catching it, Lowell had one glorious chance that was booted just wide, deflecting off my ever-present sweeper back, John Sixsmith. From that point forward, I tried to hang onto any ball I could get my hands on.

Meanwhile, our Wen-Ham club started building pressure on the Lowell net toward the end of the first half, but this was a game that was fought primarily in the midfield. We went into the break tied, 0-0. Throughout the second half, my bend-but-don't break D limited Lowell to only a few inconsequential shots on frame (a grateful shout-out to Tom, John, Ahab, Tony and Jeff). Our midfielders, led by the young legs of Carson, Bruce, Billy, Jim and JJ (and occasionally Sharpy and Tim) battled Lowell for every 50/50 ball, eventually wearing the visitors down. Ian was creating chances on the right side, while Jose nearly connected on a glorious chance inside the box. Jose was then taken down on another bold run a few minutes later, resulting in Mr. Waslick's PK tally.

Things got a little chippy in the last half-hour, as youthful exuberance gave way to lactic acid, leading to a flurry of yellow cards (we doubled our season's total in about 10 minutes). But we held the fort, and came away with the three points. Almost as important, nobody got hurt, which is always a nice bonus. The icing on the cake, however, was that our merry band staved off relegation for another season (given our shaky 0-2-1 start to the season, our present 4-3-2 record is a matter of considerable pride). We went on our 4-1-1- run with a patchwork line-up (at least five guys took a turn in goal) and a lot of heart. There might be better teams in our league, but there's not a better bunch of guys.

The win also enable us to go into our spring season finale against crosstown rival FCB a bit more relaxed -- no title, or relegation, on the line. I have a great deal of respect for the Boxford crew -- good guys all -- and it will be nice to play a "friendly." Still, knowing the characters on both squads, it will be a spirited match nonetheless. I'm looking forward to it, and the cookout afterward!

Oh, one more thing. Tim Perry said he'd give me $10 to mention his tremendous 20-yard strike that connected flush against the crossbar before bouncing away harmlessly (technically, not even a shot "one goal," but a real nice effort just the same). OK, Tim, pay up!