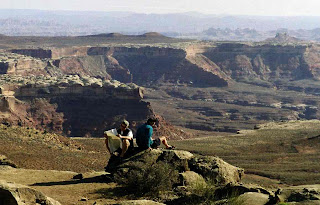 In my ongoing efforts to be more like my hip younger brother Matt (that's the two of us in the accompanying photo, trying to figure out where the hell we are along the White Rim Trail in Utah!), I've decided to put my mug up on FaceBook. That puts me only -- what? -- five years behind the curve on the cooliometer. Matt has got the whole "social networking" thing wired, and when he talks about creating a buzz, I listen. He's the main reason I took the first step by creating this blog, and now am bearing my soul to the world on FB. To be honest, I was hesitant to do either, in part because I never thought I could meet Matt's standard for literary talent, or humor. The guy (almost said "kid") is a riot ... always has been. One time, a good 10, 12 years ago, Matt was wedged between older bro Sean and myself on a chairlift at Loon Mountain, heading up to the North Peak. Sean and I never got a word in. It was then that Sean and I decided that Matt should have his own talk show on TV. The concept was simple and brilliant; Matt wouldn't need any guests -- he could just talk extemporaneously for an hour or so, and the audience members would be left falling over themselves (think of a slightly less manic Robin Williams, without the crotch grabbing).

Sadly, the talk show idea never took off, but Matty and his mad-capped sense of humor still rules the O'Connor family airwaves, with brother Mike and brother in-law Chuck a close second and third. He's also pretty savvy when it comes to "new media." I'm honestly not interested in texting, and Twitter strikes me as the ultimate in mindless self-absorption, but blogging made a lot of sense. It's a great way to keep the creative juices flowing, at a time when print publications are downsizing in a big way. With luck, it will also as a wellspring for other "This Old Jock" projects that I've got percolating. Meanwhile, FaceBook, in only the few days I've been on board, has proven to be a great vehicle for re-connecting with friends and family. Networking has never been so much fun. So c'mon, be my "friend" ... Just click on my FaceBook link right here! Matt and Sean are already in the mix!

Gotta run! The clouds have blown over, and it's looking like a great day for a spin.

Love that shot bro! Great trip... Glad the SUBURBAN made it. Questionable at times to say the least. OC Jr.

Such a great photo! I think the map is the perfect touch! Fortunately, no one can see my face, all contorted with confusion ... ;-)