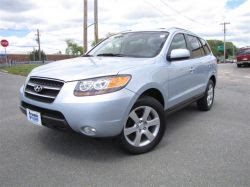 It's not often that Lauri and I buy a new car. My bride and I have been together about 20 years (married for 15), and I've had four cars over that stretch. We met while I still had my college-grad Toyota Tercel, festooned with surf stickers. Those stickers were, in fact, the only thing holding the rusted-out hatchback together. Shortly after Lauri and I became an item, I graduated to a Mazda MPV (which Lauri dubbed "the Manly Power Van") because my windsurfing addiction required a vehicle with more storage space. It was a deep red, and when my future father in-law inquired why a single guy needed a van, Lauri told him: "It's for his toys." After which, Dick referred to the Mazda as my "sleigh." I didn't mind the Santa connection ... the truth, as we were taught in journalism school, is usually the best defense.

Unfortunately for me, that same nice deep red paint job proved the Mazda's undoing, as it began flaking off within the first six months I had it. Two additional layers of clear-coat couldn't remedy a poor paint job, and Mazda eventually bought the vehicle back under the Lemon Law. Lauri and I flipped that little windfall into a down payment on our house here in Hamilton, and we went looking for a new car. Tops on my priority list was all-wheel drive. The Mazda, with its rear-wheel drive, was a smooth driving vehicle for three seasons, but an absolute horror show in a typical New England winter. So I downsized, settling on a Subaru Legacy wagon that proved to be one of the best investments I ever made. This tough little rig withstood two trips to the body shop (one collision was admittedly my fault, while the other - a fallen tree limb - was not). For 13 years, my rugged Subaru answered the bell, almost without fail. When Lauri inadvertently fried our second car, a Toyota Camry (the radiator split along the bottom) four years ago, we opted for another Subaru wagon, an Outback. In between those purchases, we had added two beautiful girls to our home, and another rig, a seven-passenger Mitsubishi Montero, to the stable. We picked the Montero up with 95,000 miles, but it came from a friend, and we knew it had been well cared for.

For five years, the "Monty" served as our family bus, and served us admirably. But in the past year, she was beginning to show her age. Last summer, four new brakes set us back a good chunk of change, and the air conditioner gave out. This year, with almost 140,000 miles on her odometer, we knew the Monty's demise was inevitable (and potentially very expensive). It was time to start shopping.

While I was not opposed to yet another Subaru gracing our driveway, Lauri insisted on a vehicle with at least three seats (or room for seven, minimum). We also needed something that would accommodate our lovable Labrador retriever, True. A minivan wasn't out of the question (my sister and our next door neighbors each have a Honda Odyssey, and rave about them), but Lauri is clearly not a mini-van fan. Plus, the all-wheel drive models are pricey, as are the AWD SUVs (the 7-passenger Subaru Tribeca, for example, was at least $10K out of reach). We asked around among other parents. A good friend picked up a Hyundai Vera Cruz last year, and likes it a lot. I liked the price (mid-$20K). A couple of weeks ago, after my Thursday noontime skate, I stopped by our local Hyundai dealership, just to get a few brochures. On the lot was a used, all-wheel drive Santa Fe Limited, simply loaded, with only 17,000 miles on it. Already under agreement, said my salesman, the Rev. Clinton Sherald. Too bad, I replied.

So, after asking the reverend to keep me posted on any new or used seven-passenger Hyundai SUVs that came across his radar, I motored home. Not 48 hours later, the reverend called to say the deal had fallen through on the Santa Fe. Was I interested? I told him I'd definitely like to take a closer look. The vehicle, powered by a responsive V-6 and 5-speed automatic, was a dream to drive, and appeared to be in spotless condition. Even better, after snooping around the glove compartment for more information, like a Car-Fax report, I found the registration, and discovered that the previous owner was a friend of mine. How often does that happen? I called Ron the moment I got back home, and he gave the Santa Fe two thumbs up. "The lease was ending," he told me. "If it hadn't been leased by my practice, I'd still be driving it. We loved that car." Coincidences, and recommendations, don't get much better than that.

So after Lauri gave the Santa Fe her own seal of approval (it will be her car, after all), and the usual give-and-take of negotiations, I brought the Santa Fe home on Monday. It is, as Maddi exclaimed, "Sweeeet!" Plus, it's a lot more car than we could have afforded if we bought brand new. OK, it's not exactly "new," but it's new to us. And if the Santa Fe holds up as well as my original Subaru, I'll consider myself a very lucky man!