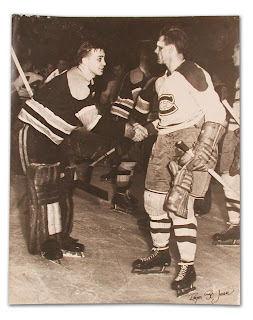 Just a few hours before what may be the final game of the 2009 edition of the Stanley Cup Playoffs between the Detroit Red Wings and the Pittsburgh Penguins (with the Winged Wheels up, three games to two), I'm thinking about what makes this game the best in all of sports. Those who know me know I could go on and on and on about hockey's superiority to any other athletic competition, but all you really need to see is the accompanying photograph. It is a classic. Taken in 1952, after the deciding game of the Stanley Cup Finals between the Boston Bruins and the Montreal Canadiens, it epitomizes the very essence of the game.

To the left is "Sugar Jim" Henry, the Bruins goaltender. He's grasping the hand of a battered and bruised Canadien legend, Maurice "Rocket" Richard, one of the most dynamic, and most volatile, superstars of any sport, in any era. Richard had been knocked into la-la land earlier in the game, and was carted off the ice. No one expected him to return. Today, he wouldn't have. But in the 1950s, players were able to shrug off the concerns of trainers, and Richard, despite clearly suffering from a concussion, returned in the third period. Cementing his legend, Richard (pronounced REE-shar) scored the game-winning goal on one of his high-voltage sorties to the net, slipping the puck past Henry. This photo, one of hockey's most famous, captures the two weary but proud combatants during the traditional post-game handshake.

No one knows exactly when the handshake line, which consummates every Stanley Cup series, originated, but I'm glad someone thought of it, and that hockey players embraced it. The idea of two teams battling tooth-and-nail over the course of a best-of-seven series, literally beating the snot out of one another, being able to immediately put their differences aside speaks to the character of the men who play this game. It is that character that hockey, through its team-first focus, engenders.

The handshake concept is so compelling that it's been adopted throughout the hockey-playing universe. I play in two competitive leagues, an Over-50 League on Tuesday nights, and another Friday-morning adult league, the Blades and Breakfast Hockey Club. Both leagues end games with the teams lining up to shake hands. Believe me, that's not always easy. Given hockey's physical nature, there's bound to be a dust-up or two during the games, and I've been in the middle of my share. But the handshake line forces you to "man up," look your opponent in the eye, and win or lose, compliment him on the effort. In a day and age when "respect" is sorely misunderstood, the handshake embodies what it means to honor your opponent. In all my years, I've only skipped the line twice (both times after I felt the opposing team was running up the score). Both times I later realized, after I had a chance to cool off, that I was wrong. Hockey's handshake transcends the game just played; it's a reminder that we're part of something even greater than one game on one night. No matter what the final score, no matter who wins or who loses, the handshake line reminds us of the importance of lacing them up, getting on the ice, and playing the game. It reminds us that sportsmanship trumps everything else.

And tonight, hockey's best go at it again.