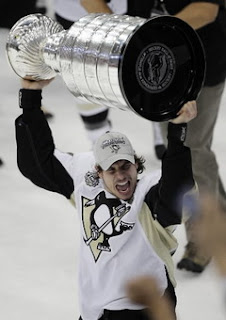 I've been watching Stanley Cup celebrations since 1972 (when my current "hometown" team, the Boston Bruins, edged my first hockey love, the New York Rangers, in six). And it never, never gets old. Last night was a passing of the torch, as the upstart Pittsburgh Penguins, with three top overall draft picks (a testament to just how bad the team was a few short years ago), slipped past a veteran Detroit Red Wing squad in Game 7, 2-1, to take the hard-fought series, 4 games to 3. Admittedly, being an old jock myself, I was pulling for the aging Wings to have one last dance with Lord Stanley's Cup, and it looked like they were in command after a 5-0 drubbing of the Pens in Game 5. But the tenacious youngsters from Pittsburgh, led by three stars who couldn't grow a decent playoff beard between them -- goalie Marc-Andre "Gumby" Fleury, Evgeni "Gino" Malkin, and "Sid the Kid" Crosby -- came storming back to take the last two games. It was the stuff of champions, and Pittsburgh was a deserving champ.

But what really grabbed me, after the last crazy scramble in front of Fleury's crease and the final horn, was the sheer exuberance of the victory celebration. I only hope Crosby, shown in the accompanying photo (somewhere, Tony "Stale Bread" Davenport is weeping in his orange & blue Islander pajamas), the youngest captain to ever hoist the Cup, understands just how fortunate he is!

The Stanley Cup is, without question, the most revered and most coveted of any major sports trophy. Quick, name another championship named after the trophy?!! Lord Stanley's Cup has taken on iconic status; it is hockey's Holy Grail. It has the power to make grown men cry, and those who hope to one day raise it overhead won't even touch it. That's some powerful magic.

Some of the best players to ever lace up a pair of skates, including two of my all-time favorite netminders -- Tony Esposito and Eddy Giacomin -- never won it. Another favorite, Raymond Bourque, the second best defenseman to ever don a Bruins jersey, had to OK a trade to the Colorado Avalanche to get his chance, and he made good on that one opportunity (so relieve was Bourque after finally hoisting the Cup that he promptly retired, leaving $6 million on the table). The players on the winning teams, all of them, have their names engraved in the polished rings that support the original Cup. In hockey terms, that's akin to immortality. And these Penguins, the long-struggling offspring of the great Mario Lemieux, will now see their names preserved forever. That's how it should be.

SO good to see Ray hoist that magnificent chalice here in Denver - I'm not sure who celebrated more - D-town or Bean-town! Ha ha... Great post bro!

What is with Crosby not shaking hands with the Wings? Maybe Tony will uipdate his blog with a rant about that! You already had a post about that and Crosby acts like a jerk.

c'mon, Psycho, "CrosbyGate" is much ado about nothing. I'd be surprised if even "Stale Bread" Davenport takes the bait on that one. That whole scenario just proves how stupid Bettman and the NHL brass is. The handshake ought to precede the Cup presentation, like they do in the conference finals. To make the losing team sit around and watch all that is just plain dumb (which is a pretty apt description of the commissioner, who still doesn't "get" hockey!).

Please Brion, when did you start becoming a Crosby apologist? He can't figure out that there is a handshake going on. Pathetic! Is the guy stupid? Bettman is a hell of an improvement over Eagleson's mouthpiece, Zeigler (remember that idiot?).

Why so angry, John? ;-)
Crosby is in his early 20s, he's just won the Stanley Cup, he's getting pulled in six different directions by TV, the NHL brass, etc. Look, I think the guy is a whiny brat (an incredibly talented whiny brat) who was overwhelmed by the moment. There's no sin in that. The real morons are Bettman and his NHL front office cronies ... (Plus, Bettman is a mouthpiece for greedy owners like Jeremy Jacobs; I'd much rather see a guy like Paul Kelly running the league, not some NBA cast-off!)