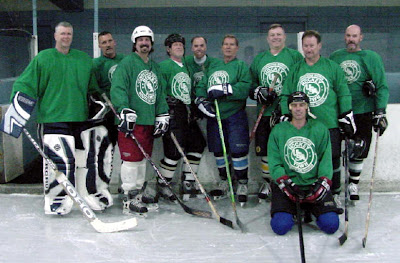 With all due respect to our servicemen and veterans, especially given our recent observance of Memorial Day, I couldn't help but think of "Band of Brothers" when I saw this team photo of my Over-50 squad, the Indians (thankfully, political correctness hasn't infiltrated the deep catacombs of Commissioner Larry Abbott's HockeyTown office!). We're one of 11 eclectic teams that make up the Tuesday night Over-50 league, one of the best hockey programs I've had the good fortune of being associated with in my 40 years of playing this great game. We're a motley crew -- just like the other 10 teams -- that inevitably bond over the course of a seven-month season.

Many of the guys have been playing together for years ... I was a relative late-comer. Though the league allows goalies as young as their early 40s to play, pride and an over-inflated ego prevented me from joining up until I had officially past the half-century mark. I started the season with the Tigers (most of the teams are names after either Hockey East or Ivy squads, save for the curiously dubbed Turtles), but was traded mid-season to the Injuns (known to most as Team PBR, for our beverage of choice, Pabst Blue Ribbon ... maybe we ought to inquire about sponsorship possibilities?). Johnny Russo (in the white helmet) also came on board, and the Indians went on a late-season tear, moving up from last to 8th place in the league standings. I wasn't around for most of the rally, sidelined by a nasty case of tendinitis in my right elbow. But in the short time I played with these guys, I really enjoyed getting to know them.

Like most of the Over-50 squads, we're a mix of "A," "B," and "C" level talent. Dan McCraine (black helmet) is a granddad who can still skate like the wind (God bless him). Russo is a goal-scoring machine, and Dartmouth grad Tommy Garden (next to McCraine), another late-season addition, is our Energizer Bunny. Our "D" is anchored by Bill Riley, Rich Bowman, Jim Montanaro and Bill Piotowski, while Louie Puccilli, Pat Gallivan, and Ray Sampson add some offensive pop. Steve Palmer is the ultimate rover, willing to play wherever we need him. Sometimes -- OK, every now and then -- we play like a well-oiled machine. Sometimes we can't get out of each others way. More often than not, our performance falls somewhere in between.

The real key to this team's success, though, is getting along in the locker room. Here, the Indians excel. Everyone wants to win, and things have been known to get a little testy, especially when we've wound up on the wrong side of the final tally. But overall, this is a great bunch of guys that get along off the ice as well as on the ice. As someone who works from home, without the normal interaction that an office environment allows, I really look forward to the locker room camaraderie that Tuesday nights offer. Everything is fair game -- jobs, wives, girlfriends, injuries, good plays, bad plays, the referees, each other, you name it. It's all done in good fun, and the non-stop banter and laughter is absolutely priceless.

So here's hoping that Commissioner Abbott decides to keep the Indians together for next year. We may have gotten bounced from the playoffs prematurely this spring (losing to Larry's Blackbears, of all teams!), but we'll be back next year, gunning for the top spot. After all, hockey, like hope, springs eternal!