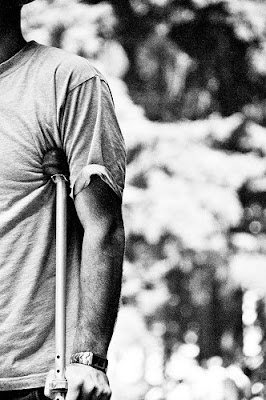 The easy part, as with all surgery, is actually going into the hospital, and letting the doctors open you up, dig around, and make whatever repairs they deem necessary.

That was followed by something of a hip honeymoon. I was coddled at home, and pretty much wherever I went. College kids would open doors for me while I was covering hockey games, and everyday folks would routinely give me a wide berth whenever I came staggering along. It was encouraging, to be honest, to see so many people making the extra effort to care for the gimp. And that, essentially, was what surgery had reduced me to.

I was ordered to avoid full weight bearing on my surgically repaired right hip, primarily because the repairs were more extensive than my surgeon – Dr. Richard Wilk – initially anticipated. When I met with him just prior to surgery, Wilk was candid. Blunt, even. Fifty-year-old hips, he said, rarely are candidates for repair. More often than not, the labral tissue is so shredded that the best option is to simply clean things out.

Fortunately, for me, once he got all his arthroscopic probes and instruments into my hip, Wilk found the tissue was in decent condition, or at least better than expected. True to his word, he made the repairs. I vividly remember, coming out of anesthesia, meeting with Wilk. He told me, in his typical straightforward manner, “I’ve got good news and bad news.”

“Well, we did a lot more repair work than we originally planned. The tissue was is pretty good shape, so we put in a couple of anchors.”

Good news indeed, I thought. “And the bad news?”

“Better repairs means a longer rehab. You’re going to have to be patient.”

No way around that, I thought. The work was done, and I had specifically asked Wilk to do the repair work if he felt it was worthwhile. Now the ball was, proverbially speaking, in my court. The surgery was behind me. Now, it was all about recovery and rehabilitation.

Predictably, I wasn’t the best patient, post-op. My wife, an occupational therapist, went out of her way to make sure our house (fortunately, a ranch) was free of obstacles. It would be six weeks, minimum, on crutches, to avoid any weight bearing on the repaired hip. When I got antsy, I’d take liberties, walking around the house without crutches. And if they caught me parading about, all my girls would read me the riot act.

I’d commiserate with my older brother, Sean, an orthopedic surgeon from New Hampshire. Sean, 18 months my senior, is just as active, if not more so, than I am. He understands the need to keep moving. Like Woody Allen’s terrific shark analogy in Annie Hall, we believe that if we stop moving forward, we’ll die.

“The problem is that we still think like a couple of guys who are 25,” says Sean. “Our brains won’t admit how old we are. But our bodies are 50, and the fact is, we’ve put our bodies through a lot of wear and tear.”

That wear and tear was plenty evident on my X-rays, which revealed fairly advanced osteo-arthritis on both sides. That’s the reality for me, and my hips. Sean, after taking one quick look at my X-rays, basically told me that my hips didn’t owe me a thing. “I can’t believe you’ve been playing hockey on those hips for the past 20 years,” he said.

Which, of course, made the decision to have surgery that much easier. I didn’t have anything to lose, really. Post-op, Dr. Wilk was noncommittal. The cartilage had, as predicted, flaked off the hip socket like rotted ceiling tiles. There were now small areas where the head of my right femur and the hip socket were bone-on-bone.

Surprisingly, I wasn’t in much discomfort in the week after surgery. I tired easily, which was understandable, since my body was busy repairing itself. Still, I took painkillers for only a couple of days post-op, and then put them aside. I’m not a big medication fan, anyway. I’d would rather know if I’m pushing the joint too hard. I’m no hero, but I believe masking aches can be dangerous. But the truth was, there wasn’t much pain. My spirits soared, perhaps a bit too much too soon.

I went out and bought a huge supply of triple-strength Osteo-BiFlex, with the hope it would accelerate the healing process. Though considered suspect by some, the glucosamine/chondroitin formula couldn’t hurt, said Wilk. It wasn’t the miracle supplement (“Clinically shown joint within 7 days!”) that the package promised it was, he said, but there wasn’t any real downside, either. My body would either take to it, or it wouldn’t. Simple as that.

Today, six weeks out from my surgery, I’m finally off the crutches. That mean it’s time to start rehabbing. I’ve got a date with the physical therapist next week, and hope to get a regimen that will ultimately get me back on the ice, and the slopes, and the bike, and the soccer pitch, sometime in early 2011. My surgeon has warned me not to get too optimistic, but I can’t help myself. It’s my nature. I have a history of getting injured, But I’ve also been a pretty quick healer.

Of course, I also have hips that are a candidate for carbon dating. Father Time doesn’t really care about my hopes and dreams and silly, old-man expectations. I want another bite of the apple; I’ll admit that. Wilk, though specifically stating that he doesn’t like making predictions, nonetheless gave me some odds to keep in mind, as parameters. The likelihood that I’d be able to play hockey again was pretty encouraging: 80 percent. The chances of playing goal again? Not so good. Probably 15-20 percent.

But I’ll take those odds. What choice do I have? Plus, it’s time to stop wondering, and time to get to work.