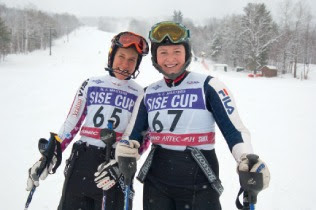 As long as I can remember, I've been inspired by ski racers. In my youth, Billy Kidd and Jean Claude Killy captured my imagination. Later, it was the Mahre brothers, Bill Johnson, Franz Klammer, or Hermann Maier (the Herminator!). This past weekend, the girls and I were up in northern New Hampshire at Cranmore, which was hosting a masters ski race. The atmosphere was tremendous -- good-natured competition interspersed with a lot of laughter and more than a few tall tales and stories of bygone days. The competitors ranged in age from late 20s up to 95! Those folks are my heroes. So are Carolyn Beckedorff and Jessie McAleer (above), two skiers I profiled for UNH's alumni magazine.

Two women, teammates on the University of New Hampshire ski team, one enduring common passion. The fact that Carolyn Beckedorff '89 and Jessie McAleer '93 still share a love of racing and an indomitable will to win guarantees that the two also share the same hill almost every winter weekend on New England's Sise Cup masters ski racing circuit. As a result, they also must share the limelight.

Since 2001, when McAleer entered the masters ski racing ranks, either she or Beckedorff have taken home the season's top Sise Cup honors. The results are uncanny. In those nine seasons, McAleer has won five crowns, Beckedorff four. Each time McAleer has won, Beckedorff was second. McAleer has two second place finishes (having missed the 2008 season to injury).

"I love the fact that Carolyn and I push each other," says McAleer, 39.

"It's an amazing rivalry," echoes Beckedorff, 41. "I know if I want to win on any given day, Jessie's going to be coming after me. We both raise each other's game, and that's really neat."

Last ski season is a perfect example. McAleer came back from total knee reconstruction with a vengeance, winning the overall 2009 Sise Cup title with Beckedorff, the 2008 champ, finishing a close second. However, at Sunday River in Maine last March, Beckedorff was able to defend the national masters slalom crown she won in 2008. McAleer, racing full out to make up an 18 one-hundredths of a second deficit to Beckedorff after the first heat, straddled a gate in her second run and was disqualified. The giant slalom followed the same scenario. The wins were sweet redemption for Beckedorff, who saw McAleer eclipse her combined time by 1 one-hundredth of a second in the 2006 slalom nationals.

Still, the roads leading to this remarkable intersection are winding, even though they both ran through Durham. Though teammates on the Paul Burton-coached squads, McAleer and Beckedorff didn't share the same success. Beckedorff was star-crossed, with a litany of injuries, including a blown-out knee and broken tailbone. McAleer, three years Beckedorff's junior, eventually garnered All-East honors despite fracturing both her wrists her freshman year. "I was never that superstar, but I sure did love it," she says. "Being part of that ski team was one of the best experiences of my life."

Beckedorff agrees. "The program at UNH is a lot of fun," she says. "They're very serious and they want to win, but I don't think they burn out a lot of people. They do a really good job of fostering a lifetime love for the sport."

Off the hill, though, the two are very different people. Beckedorff is the lead trader for a Boston investment firm, a wife and a mother (son Harrison is 7 years old). McAleer is single and, after a 7-year stint on the pro ski-racing circuit, is now a recruiter for a Boston-based software company. "After I got out of school, the bug still had me," says McAleer on her pro career. "I'd been doing it for 20 years, and I felt like I had a lot more in me."

Both returned to masters ski racing through coaching. Beckedorff answered the call from Burton to help with the program at Gunstock Ski Area, where she met her future husband, Tony DiGangi. McAleer, after a two-year hiatus from the sport, returned to the Mount Washington Valley ski program, and her former coach, Dave Gregory.

In the gates, Beckedorff and McAleer take decidedly different approaches to achieve startlingly similar results. Beckedorff is more tactical, a superb technical skier who relies on precision to find the quickest line. McAleer, by her own admission, is more about raw power, and the rush. "I just love it. There's really no other place I'd rather be," says McAleer. "I'm going to give it 110 percent."

"Physically I'm very strong," says McAleer. "But mentally, I'm not shaken by terrain or weather or other people. Actually, that stuff tends to jack me up and I get even more excited. It brings me to a different level."

Neither has any intention of slowing down. Both remark how they admire the masters races who compete well into their 70s, 80s, and even 90s, yet are focused on the upcoming season. Beckedorff says she has "probably trained harder this spring, summer and fall than I ever have. I guess I am competitive in that way, because I want to bring my A game."

McAleer, meanwhile, spent two weeks this summer skiing in Chili. "I think I skied the best slalom of my life down there," she says. "I had an epiphany. I felt really strong. So I'm feeling really, really good about this season."

Which is good news for this unique rivalry, and bad news for anyone else aiming for the top spot on the Sise Cup podium.