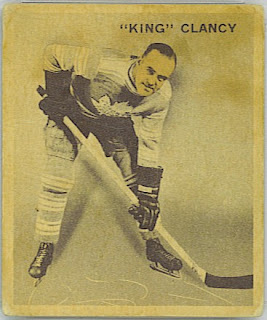 This week, I finally got back on the ice for a skate with the guys after what was essentially a five-month hiatus (unless you count that two-week period in November when I thought, incorrectly, that my injured groin had healed sufficiently). I should have been ecstatic. Instead, I was the original surly boy. Why? Well, for starters, I stunk. I felt slower than ol' Francis Michael "King" Clancy, at right, and he's been dead for more than 20 years! (Actually, in his day, King Clancy -- all 5-foot-7 of him -- was one hell of a player, but that's another story. I just like the old-time sepia print!) Of course, in the rationale part of my mind, I knew that's exactly how it would happen. At 52, you don't take a half-year off anything and expect to jump right back without missing a beat. But hockey, like most athletic endeavors, isn't always a rationale exercise.

I was really looking forward to playing again, if only to work off some of the pent-up, nervous energy that has been driving me (and my wife) batty during my recuperation. There was also some trepidation, since I knew the groin hadn't completely healed, and that it might even require surgery. My orthopedic guy wasn't sure if it was a sports hernia or not, and the specialist he recommended couldn't see me for five weeks. I figured, if surgery was in the cards, I might as well pull out all the stops beforehand. So I arrived at the rink with this odd mix of emotions, cautious excitement blended with some serious butterflies, knowing I wasn't in the best of shape. Worse, I even had a hard time remembering how to put the gear on. Getting on the ice didn't allay my concerns.

For starters, I was playing defense, which isn't my forte (any skating I do outside the goalie crease is something of an adventure). But I like to think that I can play a serviceable D if the competition isn't a bunch of former college players. But on Monday, I felt like the Goodyear blimp surrounded by stunt planes zipping around me. The only consistency to my game was that I was continuously a step or two behind the play. It wasn't just my feet that were moving at a glacial pace. It was my mind. From the bench, I could follow the game fine. But on the ice, I felt clueless. And even when I did see the play developing, I couldn't get my legs moving fast enough to be a part of it. Which led to a real predicament ... While I love the game of hockey, I didn't especially like how it felt to be so far off the pace. I got burned on several plays, leading directly to goals for the bad guys, which led to me getting cranky. Really cranky. The guys on the bench were having fun, cracking wise like they always do, while I just sat there steaming.

Which got me to thinking: If I care so much for the game, why am I having such a miserable time? It is, really, one of the great quandaries of being an older athlete. Our skills, or bodies, or both, erode ever so subtly (or not-so-subtly, in some instances), and suddenly we realize we can't do what we once could. Not even close. And that's pretty damned frustrating. The challenge, of course, is to find a way to keep the love strong, even as the game gets weak. I know (again, the rationale side) that I should just lower my expectations, but the emotional side isn't really on board with that. Shocking, huh?

For the time being, I'm telling myself to be patient, and to rededicate myself to a fitness regimen that will, with luck and hard work, get me a little closer to the rest of the pack. But I've got a bad feeling this little dilemma isn't going away anytime soon! ;-)