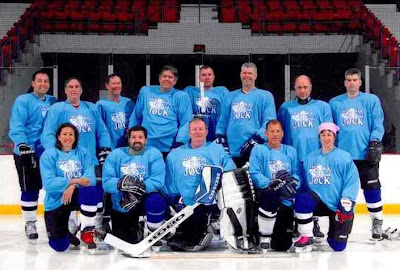 OK, that's not exactly true, as our stalwart left wing Tony Davenport did in fact remember to bring his hockey pants to our recent "adult" hockey tournament (given our behavior, the term "adult" applies only in the loosest of definitions).

But anyone who readily admits to the world that he forgot that essential piece of hockey gear during one late-night trip to the rink (check out RinkRatRants) deserves full props. Likewise, our other left wing, Robyn Nixon, deserves credit for managing to keep her pants on, despite the best efforts of a couple of Quebecois Fabio impersonators from a romance cover model convention that happened to descend on Lake Placid at the exact same time as our tournament.

I'd like to offer more detail, but am forbidden by the ironclad "What happens in Placid, stays in Placid" ground rules! Too bad, too, 'cause the stories would be a lot more entertaining ... !

Nestled in the serrated Adirondacks of upstate New York, the resort town of Lake Placid would be the original "Land that Time Forgot" if it weren't for a single hockey game held on Feb. 22, 1980. The famed "Miracle on Ice" was the seminal sports moment of the 20th century, the ultimate upset, when a gang of fuzzy-faced college kids managed to knock off the mighty Soviet hockey team, 4-3, on their way to winning the gold medal in the 1980 Winter Games.

Today, it's almost impossible to imagine this place hosting a full-scale Olympics. With it's Tyrolean-themed motels and quaint downtown shops and funky restaurants and bars, Lake Placid appears to be stuck in a time warp (heck, the speed skating oval isn't ensconced in some arena ... it's plunked smack-dab in front on the high school, right along main street). If only our team of old-timers - the Never B's - could turn back the clock so easily.

We entered a Canadian Hockey Enterprises tournament earlier this month, with the hopes of erasing memories of a rather dismal performance last spring. In '08, a few members of our squad were clearly more focused on the extra-curricular activities in Placid, and we got throttled in three straight games. I played goal, and vowed to return only if I could play defense this time around. When my brother Chris signed on to play, it was a lock.

This year, however, the Never B's suffered from a timing problem; namely, we opted for a weekend that the CHE tacked on to accommodate an overflow of teams, and they simply didn't get the anticipated numbers. The average age of our squad was about 46, but given the low turnout, we somehow got stuck in the Over-35 Lefty Wilson Division. Truth be told, we also had a skill problem (or lack thereof).

Translation? Three straight butt-kickings at the hands of younger, faster, more talented teams (did I mention they were younger? Much younger?). Poor Rollie Briere, our brave-but-beleaguered netminder, could have sued us for non-support, as we got shelled, 7-0, 6-0, 6-0. We hit a couple of posts, which was a moral victory of sorts, but could never get the damn puck in the net (this despite an opposing goalie in our final game who had been drinking all afternoon!).

Still, I'll wager no one had more fun than the Never B's. Just being in that rink, with all those ghosts and Al Michaels's voice haunting the rafters, is a phenomenal experience. And one of the really cool things about these tournaments in general, and our squad in particular, is that most of the folks aren't suffering from any illusions of grandeur. We know our limitations on the ice, but we're not going to let those limit the fun we have off the ice. The sight of Scott "Spam Me" Handelman quivering at the onslaught of a thousand overweight Midwestern women with Jesus in their hearts is seared into my memory, as is "Lavender Laura" Ward defending herself against charges that she was responsible for Mark "Moonroof" Knobloch's rain-soaked gear (and car).

We had a blast, and no one got hurt (with the possible exception of Rollie's psyche). Plus, I had a chance to design our stylish sky-blue sweaters (or "gay" jerseys, as John "Psycho" Steel likes to call them), unveiling a new This Old Jock hockey-themed logo (below). The team name, however, will always remain the Never B's ("never were, never will be"), captained by Tony "The Pantless Wonder" Davenport and Brad "CSI Toronto" Dodge.

And we'll be back in Placid, powder blue jerseys and all! I'm sure our opponents are shaking in their skates!

By the way, you can find my brother Chris in the above photo, back row, third from the left. I'm in the same row, third from the right. I'm not allowed to identify any other players per the aforementioned Placid/Vegas Rule, except for "Sniper Bait" Steel on the far right! 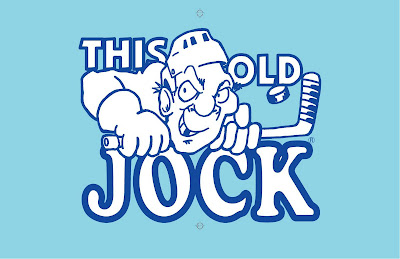 Don't forget Brad and John playing a game of floor hockey at 2 am in John's room, keeping center Bob "Promised Land" Moses, one floor below, awake til all hours.

I see your skill with photoshop outweighs any atheletic pretends you claim to have. Everyone who is acquainted with you knows that you still have training wheels on any bike you ride. Good job with the visual editing though.