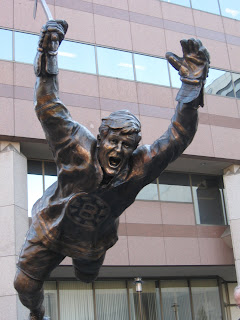 When I first heard of the idea of a Bobby Orr statue being erected by the TD Garden, I immediately felt torn. On one hand, I truly believe Orr was the greatest hockey player -- the most revolutionary and most complete player -- to lace on a pair of skates. I grew up in New Jersey, a fan of the New York Rangers, and I still admired Bobby Orr, as painful as it was at times (he almost singlehandedly beat the Blueshirts in the 1972 Stanley Cup finals). He could do anything on the ice -- pass, score, skate, defend, fight -- and he did it with a disciplined fury, with unmatched grace, and with humility. If there was ever a Bruin deserving of the honor of being cast in bronze, it's the pride of Parry Sound.

On the other hand, knowing the marketing types that have infiltrated not only the Boston Bruins, but all of big-time professional sports, this kind of grand, public display smacks of self-serving, self-important self-promotion. Even Orr, the consummate professional, was never one to seek the limelight, and was more than likely a little embarrassed by all the hoopla surrounding the unveiling of the above statue yesterday. That's one of the reasons we loved him.

Orr was always about "team." He lived and died with each win and each loss. The current Bruins owners are about ticket sales, beer and hot dog sales (at ridiculous prices), and profits. They erect a statue that symbolizes all that was once right with the franchise, unaware how it shines a very bright light on their own shortcomings. The statue captures Orr in mid-flight, having been upended after scoring one of the franchise's biggest goal, an overtime winner that beat the St. Louis Blues in 1970 and secured Boston's first Stanley Cup in 29 years. It's now been 38 years since the Cup has returned to Boston (a period highlighted by former Bruin great Ray Bourque visiting with the Cup he won in Colorado, a heartfelt tribute to his fans, and an absolute dagger to the hearts of Harry Sinden and the Jacobs family).

Last year, the Bruins cruised through the regular season with one of the best records in the NHL, but stumbled badly in the playoffs, getting knocked out by Carolina in the second round. This year's squad, beset by injuries and anemic goal-scoring, barely squeezed into the playoffs. But they've proved a resilient bunch, and edged Buffalo in the first round before taking a 3-0 series lead against Philadelphia. They returned home Monday, still holding a commanding 3-1 series lead, when the Jacobs family decided to unveil the Orr statue, 40 years to the day that Bobby converted Derek Sanderson's slick behind-the-net pass.

Inexplicably, the Bruins then proceeded to stink out the joint, getting throttled by Philadelphia in their own building. It was as if the hockey gods decided that no team owned by Jeremy Jacobs would benefit from trying to capitalize on Orr's good name and unblemished character. After last night's embarrassing 4-0 blow-out loss to the Flyers, summarized by Dennis "Man Cave" Wideman getting spun around with a broken stick and then simply watching as Simon Gagne rang up Philly's fourth goal, I thought of the Orr statue. What would he have thought about the Bruins' performance, the way they simply failed to show up? Funny ... as I took a look at the accompanying photo, Orr doesn't seem to be celebrating. He seems to be screaming: "Get me out of here!!!"

Who could blame him?