The most solitary position in sports ... 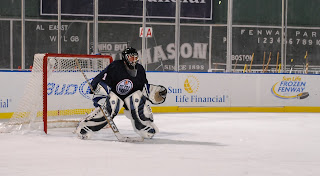 Goalie camp? At 43? Why not? Goes to show you're never too old to take a puck upside the head. This account of one of the longest weeks of my life (albeit eight years ago) appeared in the now-defunct Hockey Magazine. The photo above comes from my once-in-a-lifetime outing last January, playing at Fenway Park in Boston (which you can read about here).

Lying prone on a cool sheet of ice, gasping for air, I lapse into another Walter Mitty fantasy. I'm no longer at the Mount Vernon Recreation and Ice Center outside Washington, D.C., desperately trying to keep from overheating beneath 35-plus pounds of soaking-wet goaltending gear. No, I'm between the pipes at Madison Square Garden, sporting the home white sweater of my beloved Rangers. The time? Winter, 1974.

Boston Bruins' winger Wayne Cashman is in the corner, mucking it up with Dale Roulfe, my Rock-of-Gibraltar defenseman. The puck squirts to the front of the net. Bruins' center Phil Esposito, on his way to a 68-goal season, pounces on it. He snaps off a lightning quick snap shot, low, stick-side. I instinctively flash my left leg pad. The puck glances off my toe buckle and flips harmlessly into the crowd. In the press box, Marv Albert screams into his microphone, "Kick save, O'Connor, and a beauty!" Color man Bill Chadwick, a Hall of Fame referee, chimes in: "This kid O'Connor came to play tonight ..." A goofy, satisfied grin creases my face.

"O'Connor! Hey, O'Connor! You gonna play sometime today?" barks Gerry "Elroy" Ellison, part-time goalie instructor and full-time drill sergeant. I surface reluctantly from my reverie, blinking the sweat from my eyes, realizing I'm still at the Puckstoppers Goaltending School. Slowly, I pull my bruised body off the ice, and resume my post for the next drill. I want to blame my murky state of mind on taking a puck up side the head, but I can't. I'm hurting because I'm 43. Whatever fitness I brought to camp with me evaporated as quickly as my fantasy. And my instructors aren't cutting me much slack.

At this precise moment, I'm struggling to recall exactly why I signed on for this five-day camp. There are vague recollections - I not only hoped to recapture some of my youth, but I wanted to make sure the guys in the late-night league back home in Boston weren't thinking I'd gotten soft. Several of my goaltending colleagues have been entertaining thoughts about hanging up their pads and skates, which only hardened my resolve to turn back the clock.

Truth is, I never had any formal education in the science of goaltending. My coaches in high school and the early days of college were former position players - forwards and defensemen - who had trouble relating to goalies. As other hockey players will attest, goalies are a singular breed, requiring special tutoring (or, as one derisive teammate once told me, “custom-made strait jackets”).My education was self-imposed - I ceaselessly studied Hall of Famer Jacques Plante's tome, "On Goaltending," until the book’s binder nearly disintegrated, and tried to apply its lessons to my game.

Recently, on the downhill side of my athletic career but still playing a few times each week, my mind shifted into a "now or never" mode. I could soldier on, a half-decent, middle-age goalie, or I could try to pick up my game a notch. What I needed was some top-notch instruction. I found it with Puckstoppers, an Ontario-based outfit that visits Alexandria, Virginia, each summer for a week. You might not think of the District of Columbia and its environs as a hotbed for hockey. Think again.

At the end of every morning session, dozens of pick-up players were lining up for noontime "stick practice." Back home in Massachusetts, many rinks shut down in the summer. Mount Vernon ice director Ernie Harris tells me "This place was originally designed to have two rinks. If I had that second sheet, I could book it solid."

On the first morning of camp, I sat in snarled Beltway traffic, listening with a jaded ear to Bruce Springsteen's "Glory Days" on the radio, wondering whether I still had the goods, and whether I'd be the only gray-haired keeper in the class. Heck, I'd have settle for anyone who could legally join me for a beer afterward.

Fortunately, I met two guys my age - Gerry Oakman, who works with the Justice Department, and Joe O'Connell, a family doctor from Arkansas. Both have Boston-area roots, and share an almost inexplicable love for hockey. We hit it off immediately. In hindsight, that's not surprising.

Goalies are naturally drawn to each other. We’re part of a team, yet stand apart – masked loners, solitary watchmen standing guard by our nets the entire game, an army of one. Other players don’t know what to make of us, but most are convinced that only someone with a few screws loose would actually volunteer to play our position. Buried under layers of unwieldy gear and confined to a limited skating area, goalies stick out like ocean liners surrounded by speedboats. Together, we make up an odd fraternity, a fellowship of proud masochists.

Our task is simple: Stop a vulcanized rubber puck, an inch thick and three inches in diameter, from entering a 4-by-6 foot goal. With composite sticks and curved blades, even recreational players can fire a puck upwards of 100 miles an hour. Adding insult to potential injury, the very nature of the position leads to more criticism than applause. We give up goals, but don't score them. We're often blamed for losses, but only occasionally praised for victories. We are, in short, the team’s lightning rod.

Oakman recalls a Plante quote - "How would you like to have a job, that when you made a mistake, a big red light went on and 18,000 people booed?"

"For me, that's a motivator, to join a very select group of men and women who step up to meet that challenge," says Oakman.

Challenge indeed. I always thrived on goaltending’s unique reality – by the position’s very nature, the goalie is the one player who can single-handedly stop an entire team from winning. After all, if the opponent doesn’t score, you can’t lose. And on those rare games when I’m really focused and feeling invincible, the puck looks the size of a balloon, and moves about as quick. In my mind’s eye, it seems I can see where the puck is going even before the shot is fired. Granted, those moments didn’t come often enough to sustain my dream of a pro career or Division I scholarship. But even now, when they happen, they’re magic.

Unfortunately, I quickly realize there’s nothing “magical” about goalie camp. I understand it’s purpose and promise, but I’m ill prepared for the workload. For the next five days, two hours each morning, two each afternoon, Ellison and his Puckstoppers colleagues run us through a gamut of drills and instruction designed to improve our game. Or kill us.

We work on stance, movement, angles, low shots, high shots, deflections, rebounds, breakaways. Shooting machines fire pucks at us relentlessly - one nicks a crease in my armor, just above my blocker, and my elbow stings for hours. During each session, usually following some tortuous skating or agility drill, Oakman, O'Connell and I exchange futile glances and muted words of encouragement. Sweat pours from old pores as we struggle to keep pace with youngsters a fraction of our age. Each day, we wonder aloud whether we can finish the week. Parents of younger campers look at us as though we've lost our marbles. Incredulous, I reply: "Hey, we're goalies!"

The inference, I trust, is crystal clear - goaltenders, whether young or aging, are by definition a bit off-center. We all survive - barely.

"I'm sure people were giggling behind my back," says O'Connell, who admits hoping to play well into his 60s. "Screw 'em. I always wanted to do this."

Two weeks after I hauled my oversized bag of goalie gear from the Mount Vernon Ice Center for the last time, and the aches have finally subsided, my evaluation from the Puckstoppers gang arrives. I glance at the list of the position's finer points, including everything from dexterity, glove saves and rebounds. Most of my ratings fall in the "fair" category, with some "good" and a few "excellent" marks. Charity points, I figure. Head coach Chris Dyson reminds me, "glove in front, pads a bit apart."

"If you work on those small points, your game will be huge," writes Dyson. "Unfortunately, there were so many 'small things' I can't remember them all!"

Dyson's good-natured jab is followed by a happy-face doodle. I can read between the lines. I'm being told, gently, "Don't quit your day job." Walter Mitty would be crushed. Not me. Come tomorrow night, I'll be down at the rink, facing rubber.