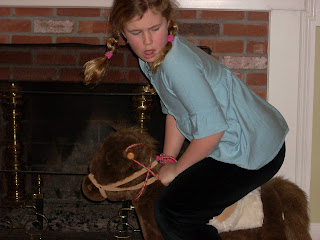 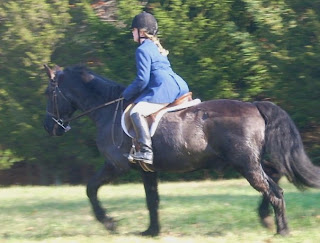 My daughter Brynne is possessed. I suppose, if I were to be completely truthful, I always suspected there was a chance of this happening. But I, like so many parents, turned a blind eye toward my child's true passion and hoped, instead, that horses would just be a passing phase for my youngest. I should have known better.

After all, this is the girl who, at the ripe old age of six, came up to me one day with a determined look in her eye and asked me if I'd take her over to Myopia, an old-moneyed hunt-and-polo club that abuts our neighborhood. "Why?" I asked, thinking I'd already guessed the answer. "Because I want to see if they'll give me a job, so I can ride the horses," Brynne replied, obviously having thought this plan through. I was caught completely off guard.

For a second, I was speechless, probably because my heart had lodged in my throat. This earnest young girl of mine wasn't asking for riding lessons, wasn't asking for a horse. She was asking for the opportunity -- at 6! -- to earn her riding time. "Oh, honey," I said, not knowing in the least the Pandora's Box I was prying open, "if you want it that bad, Mommy and I will find a way to make it happen."

And we have. Brynne started taking lessons within the month, with a gentlemen recommended by a friend who happens to belong to Myopia. For Brynne, it was love at fist ride. She took to it naturally, looking calm and composed from the get-go. Then we got really lucky. When Patrick confided that work commitments would prevent him from continuing with Brynne, he recommended Karla Parnell.

Brynne has been with Karla ever since, riding once a week (sometimes twice a week in the summer, when Lauri and I can scrape together a few extra bucks) from nearby Looking Glass Farms, atop Penny or Cricket or Dabble or Eagle. Lauri and I love Karla's no-nonsense approach, and Karla has really taken a shine to Brynne because she doesn't want to just show up and ride. She wants to immerse herself in the experience. Brynne arrives early, tacks up the horses, and stays late, brushing them down afterward. I swear, I sometimes think there's nothing she'd rather be doing than mucking out stalls. Nothing except riding, that is. And, without fail, every time I watch her saunter off with Karla, my heart stutters.

At home, Brynne's room is a shrine to equitation. She has horsey blankets and pajamas and jackets and calendars and books and portraits and statues. On the door is a sign that says, simply, "Brynne's Stable." Her favorite stuffed sleeping buddy is a handsome chestnut named Sampson. Thanks to Brynne, our DVR is overflowing with episodes of "The Saddle Club." Her Christmas list is copied directly from Dover Saddlery. She is, without a doubt, in deep. The first photo above is from Christmas two or three years ago, during a visit to my brother in-law's house. In classic class-clown fashion (Brynne is the second child, after all), she's horsing around on her cousin Olivia's new hobby horse

But this past fall, during the annual Myopia Hunter Pace, my daughter's favorite pastime really hit home. I watched as Brynne, in full riding regalia (a second-hand outfit neatly tailored by Lauri, I should add), came trotting out of the woods aboard Cricket and cleared the final jump. It was beautiful beyond words. My little girl, now 10, didn't look so little anymore (the second photo was snapped a moment later). She was a young and talented equestrian, confident and radiant. Her smile was as brilliant as it was priceless.

While I love the fact that Brynne plays hockey, I've never once allowed myself to think -- not for a moment -- that her deepest affections lie with my chosen sport. Brynne likes the rink, but she loves the stable. It's as simple as that. She's always been a young lady who knows what she wants, and I wouldn't have it any other way.