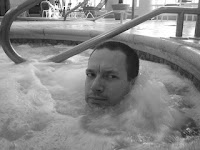 "You know
That you're over the hill
When your mind makes a promise
That your body can't fill."
Fat Man in the Bathtub
-Lowell George & Little Feat

No, that's not me in the accompanying photo, but I wish it was (OK, I'm not that good looking, but I do have more hair!). There's nothing I need more right about now than a good, long soak in a hot tub. Maybe that would be the salve for this nagging groin strain. Not to mention my decrepit lower back, piano wire hamstrings, and crunchy scapula. Then again, maybe not. Which is why I'm pretty much figuratively climbing the walls of my 10-by-8 home office.

Injuries are a fact of life for any athlete, from pro to weekend warrior. If you're going to continue to play, especially after all the growth plates have set and the testosterone levels start to dip, then its a mere eventuality that you'll get hurt. I can accept that. The problem for me isn't so much getting hurt, but the required recovery time, and the reality that it takes longer and longer and longer for my body to heal. I strained my groin more than a month ago. I knew immediately it meant at least two weeks on the Injured Reserved, but when two weeks stretched to three, and now five, I started getting pretty antsy. Actually, "antsy" is being much too mild. I'm now empathizing with Jack Nicholson's "all work and no play" character in The Shining (minus the homicidal rage, thankfully). I've been behaving, too, doing little more than ride my bike -- road spins only -- and skating lightly with my daughter's Squirt hockey team, which I coach.

Still, the strain lingers. Lauri, my bride, has recommended treating it with moist heat and light stretching, which I've finally agreed to do this week (a sure sign of just how desperate I am!). With luck, I'll get back on the ice net week, before I atrophy any more than I already have this past month (hence the "fat man in the bathtub" reference). But the mind-numbing wait, and the eroding patience, is brutal. And that's probably because I know all too well that there are far fewer games ahead of me than behind.

Injuries make us think of our own mortality, not just the end of the road of our athletic endeavors, but the end of the road that lies beyond. I, like most guys, am pretty good about denial (though I have yet to raise it to an art form). As long as there are older colleagues in there mucking it up with me, whether playing hockey or soccer, or spinning the pedals, I can make the argument that I've got a couple of years left in the tank. And, maybe even more importantly, as long as I have a place to play, I can continue pretending to be a kid. Injuries give us pause, a chance to reflect on whether we ought to keep tilting at the windmills. I'm not sure that's a good thing.

Recently, I was interviewing Jessie McAleer, the reigning New England masters ski racing champ, for a story. McAleer is 39, but she's got no intention of giving up the sport she loves. When I asked her how long she planned to keep racing, she laughed and said: "Forever. At nationals, you should see some of the older folks who get up there. One guy was like 92. He was part of the 10th Mountain Division. He gets up there on the podium, and he's shaped like a question mark. And he's got this gold medal hanging off his chest. I'm like, Oh yeah! Ski racing is scary sometimes. It's scary 'cause you don't want to get hurt, it's scary 'cause it's asking a lot to push yourself like that. You've got to mentally jack yourself up to get in the gate and do the best you can. Physically, you get banged up. To do that year after year, and when you're 89, slipping on a GS suit on, getting yourself mentally and physically prepared, driving four hours to the ski area, tuning your skis, getting up at 7 a.m. to get on the hill, that's the type of stuff that keeps you alive. "

What's difficult to convey is the sheer energy and admiration in McAleer's voice. There's no doubt in my mind that McAleer, like that 10th Mountain veteran, will keep racing as long as she's able to drag herself to the hill. I'm glad I got Jessie's interview on tape. Because, when I'm bumming about this injury or that, feeling like the fat man in the bathtub, I can give it a listen and get my thinking right. And then I can figure out a way to get back in the game.