My daughter, the teenager ... 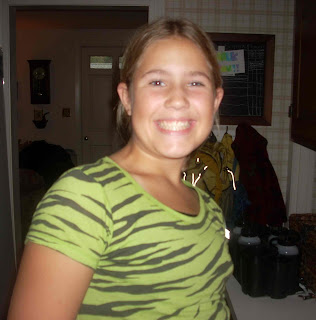 On Friday, I will become the father of a teenager! How is that possible? My life forever changed on Oct. 16, 1996, when MaryAylssa Diane "Maddi" O'Connor made her grand entrance into the world. And, if I remember correctly (sleep deprived as I may have been), she entered eyes wide open, with a pair of lungs to match! I became not only a father, but a husband in a much, much more profound sense than I ever could have imagine, being with Lauri throughout her labor.

The fact that I was in that hospital room, helping as much as any fumbling husband really can at that moment, was a testament to the seismic shift my life had taken in the previous 16 months. At age 36, the guy who my Mom said was her "confirmed bachelor," got married. Part of that deal, I knew, was children, if we were lucky enough. I've never met a woman -- or maybe I should say I never dated a women -- with such a strong maternal drive as Lauri, and she made it clear that if we were going to get hitched, then fatherhood was in my future.

Of course, being a guy, I spent our first year of marriage blissfully unaware, carrying on like I always had, running off to play hockey and hoops, riding my bike, going windsurfing. Lauri and I were young professionals, settling into a new house, all fancy free and open to a world of possibilities. But Lauri was setting up a "home," building the foundation. After all, it was my bride who, when she first saw our neighborhood, commented: "What a great place this will be to raise kids." She got us a cat -- a great, entertaining feline we named Marley -- to help me get adjusted to the concept of responsibility. Then, shortly after Valentine's Day, we learned we were in the "family way."

We signed up for parenting classes, and Lauri got busy with fixing up the new bedroom, buying cloths (a late ultrasound revealed we were having a girl!), and reading, reading, always reading. Me? I just stayed out of the way. We really enjoyed picking out the name, and settled on MaryAlyssa Diane O'Connor. The name is a playful combination of my sister's (MaryEllen), Lauri's mom (Diane), and a name we both really loved, Alyssa. Plus, her initials gave her the instant nickname of Maddi, which we joked would come in handy once our eldest became a teenager and decided she hated her name!

Now that moment is at hand, and I can't believe what a blur the last 13 years have been. Of course, everyone tells you it will pass like a freight train. Intellectually, you understand that. But emotionally, you want nothing more than to have a life DVR, something that allows you to pause, capture, or even rewind all the good parts. And there have been so, so many "good parts" watching Maddi on her journey through childhood. She's always had that dazzling smile, those twinkling eyes. She's grown straight and strong, built so much like her beautiful mom. Like most children, Maddi has been a challenge and a joy. An early daycare teacher -- Miss Marcia -- once called Maddi a "gentle soul," and in all the years that have passed since, I don't think anyone has described Maddi more succinctly or more accurately. The girl's got a heart of gold, which is something I really try to remember during all those maddening parent-child flare-ups that inevitably happen between generations. Life has an annoying way of letting all the niggling details -- the small stuff -- wear on our patience and hamper our ability to see the big picture. Again, I'm so grateful for Lauri, and the yin & yang of our partnership that allows us to council one another when one of us is spinning out of control. It's reassuring to have that rock, one that isn't bashful about reminding me just how super our kids are.

Perhaps the greatest compliment I can offer Maddi, and her mom, as well as younger sister Brynne, is letting them know that there is no place, no place, I'd rather be at any moment in time than with them. Though I'm a writer who once lived for adventure travel, I find I have, at most, a 48-hour window while away before I start missing my girls something fierce. I've discovered depths of emotion I never knew existed, fired by Lauri and stoked, constantly, by Maddi and Brynne. I realized that I could never return to the newspaper field, where human tragedy is the daily fodder of the business. I just don't have the stomach for it anymore.

Some of my new-found traits, I admit, are less-than-admirable, like the inevitable Papa Bear reaction to any perceived sleight suffered by my child. Still, always the reporter (and Libra, I suppose), I try to be fair and impartial when Maddi goes through a rough patch, whether it's a falling out among friends or a squabble at home. Often she bears some responsibility, and it's my job as a parent to make sure she understands how her actions impact others. Those lessons haven't always been easy. When she aches, I ache. Like a good friend once told me when Lauri and I were first expecting, there's no greater sense of helplessness than when your child is hurting, and you can't take that pain away.

All that said, we have been incredibly fortunate. We've had a few scares, such as the time Maddi, only two, was rushed to the hospital with an unknown viral infection. But, taking the past 13 years as a whole, we have to count our blessings. We have a small, cozy cottage here in Hamilton, which means that, more often than not, the four of us are tripping all over each other (in addition to the two cats and True, our knucklehound). For the most part, I absolutely love it. Though it would be nice to have a bigger house (just ask Lauri), I can't imagine enjoying the distance that would come between us. Maybe that will change, as Maddi, and then Brynne, burrow deeper into the unsettling arena of adolescence. I hope not. My Mom used to counsel that you prepared kids the best you could, and then you have to let them find their own way. I see Maddi, on the cusp of her teenage years, and I just hope and pray that the adventure is a rich and rewarding one. And I pray the Good Lord lets me be a part of it.