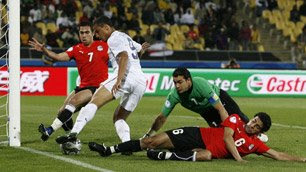 Boston, the Seattle of the East.

The United States soccer team is starting to remind me of my golf game. I keep playing that maddening game because, every once in a blue moon, I hit the ball perfectly -- right in the sweet spot -- and that one improbable moment keeps me coming back to the links. Likewise, Uncle Sam's squad can completely stink out the joint, like it did against Italy and Brazil last week. Collectively, the gang resembled my typical round of 18 -- unpredictable, uninspired, unconvincing, unable to finish. Then, everything changed with one thoroughly unexpected effort against a resilient Egypt team on Sunday. The Yanks won, 3-0, and coupled with Brazil's 3-0 dismantling of Italy, found themselves propelled into the semifinals of the Confederation Cup.

How crazy was that? Italy is the reigning World Cup champion. Although they looked old and tired against Brazil, they are still a formidable squad, having pasted the Americans 3-1 in the opening round. The real undoing for the Azzuri was a subsequent 1-0 loss to the Pharoahs, who summoned the will and tenacity to keep a clean sheet against the potent Italians (after losing a wild 4-3 affair to Brazil). Unfortunately for Egypt, it appeared the Pharaohs didn't have any bullets left in the chamber when they met the USA in the final game of the knock-out round.

The pride of Manchester, NH, Charles Davies, got the USA on the board in the first half with a never-say-die effort, eventually outmuscling three Egyptians to tuck the ball in the net (see accompanying photo, above). In the second half, the US went up 2-0 on a strike by Michael Bradley (not a bad Father's Day gift for the USA coach, Bob Bradley), and appeared to have the game well in control. Still, if they held the Yanks to two goals or fewer, Egypt would have gone through to the final round. But a tremendous header by maligned US forward Clint Dempsey (a former favorite during his New England Revolution days) dashed Egypt's hopes and dreams and jettisoned the Yanks into the semifinals.

The reward awaiting the Yanks is a date with Spain, the world's No. 1 ranked team, on Wednesday. Not only has Spain set a record for consecutive undefeated matches (35), they're also riding a current 15-game winning streak (unheard of on the international stage). Translation? Things don't look promising for the good ol' US of A. But as several pundits have pointed out in the past few days, that's exactly why the games are played on the field, and not on paper. And I vividly remember the United States' "Miracle on Ice" victory over the Soviet Union at the 1980 Olympics in Lake Placid. I'm not sure a result against Spain would resonate quite the same, but it sure would be cool. Should be fun; at least as much fun as a good walk spoiled on the links.