The Ballad of "Knuckles" O'Connor ... 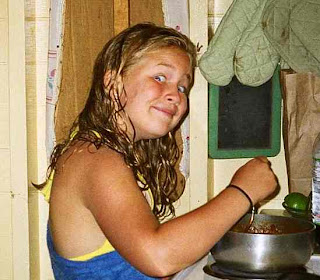 I got a call recently from the adjustment counselor at my youngest daughter's elementary school. Brynne, my 10-year-old got into a "skirmish" of sorts, and the counselor wanted to make sure I was aware of it. Seems there was some argument about a place in line for the transfer bus after chorus, and the debate quickly turned to blows. Things escalated, said the counselor, when other kids started chanting: "Fight! Fight!"

The counselor expressed "shock" to hear my daughter was involved, which is understandable. Brynne has a mischievous twinkle in her sky-blue eyes and an infectious giggle. She's pretty even-tempered, and makes friends easily. Still, my wife and I weren't surprised. Brynne, now nicknamed "Knuckles," can be pugnacious. This is the same kid who, at age 6, confronted a friend of her older sister (two years her senior) to explain, in no uncertain terms, that she didn't like how her sister was being treated at school. I remember watching the bus-stop melodrama unfold, mildly irritated that Brynne ignored our instructions that she should let her sister deal with the issue in her own way. On the other hand, I won't deny the pride I felt, knowing this munchkin was willing to take on a kid almost a foot taller in defense of her sibling (the other child, admittedly, showed great restraint, unsure of what to do about this ankle-biter getting up in her grill).

The first question I asked the counselor was, "Do you know who threw the first punch?" Brynne, though feisty, is unfailingly honest, with a keen sense of right and wrong. She told the counselor she was defending herself. The other girl, a year older, apparently has "anger issues" and might have tried to intimidate Brynne. If that's the case, I told the counselor, I'm glad my daughter didn't back down.

Now, I'm not making light of our daughter's schoolyard scrap. I've seen young girls in action, especially with our eldest (who has a much more passive personality), and know how mean-spirited they can be. Lauri and I don't advocate fighting as a model for conflict resolution. I suggested Brynne use her strong voice (and she's got pipes) to tell any bully to "Back off!" But I also told her that if she was being picked on, and wasn't the aggressor, then she had every right to stand up for herself. The counselor didn't entirely concur with my position. The schools, she said, would rather have Brynne find a few supportive friends, and gently extricate herself from the situation. She floated the idea of a "mutual apology."

I disagreed. Bullies attack any weakness, real or imagined. Brynne is not weak. By showing a willingness to protect herself, she's telling any potential bully, "You've got the wrong girl." And I've got her back. She would not be apologizing, I politely told the counselor.

I certainly don't want my girls starting fights. But I don't mind if they finish them.